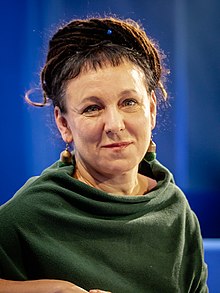 As much as I’d like to pretend that my planning skills really are that impressive, the timing of this week’s reviews of Olga Tokarczuk’s House of Day, House of Night and Primeval and Other Times had nothing to do with the writer receiving her Nobel Prize in Literature – I was just busy with other things in November…  Nevertheless, having started an impromptu Tokarczuk week on the blog, it only seems right that I continue it, and today’s post will cap off my reviews of her fiction with a look at another text that appeared more recently.  It might not be fiction, but it’s interesting all the same, and thanks to those nice people at the Nobel Foundation and the Swedish Academy, it’s also available for everyone to read in English.

Wait a minute – I think I’m forgetting someone here…

*****
Tokarczuk gave her Nobel lecture earlier this week, and her talk, entitled ‘The Tender Narrator’, was typically intriguing, absorbing and generous.  How do I know?  Well, my Polish isn’t all that good, so I certainly wasn’t in any position to listen in, but luckily the text of the speech, in three languages, has been uploaded to the Nobel web-site, with Jennifer Croft and Antonia Lloyd-Jones (appropriately) having worked on the English-language version – my thanks go out to both of them 🙂

The piece begins with Tokarczuk describing an old photo of her mother staring into space, and as the story goes, when the young girl asked her mother what she was doing in the picture, the reply was that she was waiting for her daughter to arrive in the world.  The writer interpreted this response as her mother’s way of giving the unborn Olga a presence in the universe even before her arrival on the scene, and this bequest of a soul of sorts gave rise to the concept of the tender narrator, an idea Tokarczuk expands on throughout her lecture.

As you can imagine, Tokarczuk likes to look on the positives, and she tells how, as a young girl,  she became intrigued, and a little distressed, by the story of a broken teapot.  In her youthful belief in the ‘goodness’ of the world, she was a firm adherent of anthropomorphism, considering all creatures and objects as living parts of our world (so don’t throw out the broken teapot!).  Eagle-eyed readers may recognise that idea from her fiction, particularly in the chapters devoted to icons, games and mushroom colonies in Primeval and Other Times.

Sadly, though, much of the talk shows how this idea of togetherness and belonging has become distorted in the modern world.  It was thought that the Internet, in providing universal access to all knowledge, would bring wisdom in its wake, but instead we see increasing fragmentation and tribalism, or, as Tokarczuk views it, a worrying downward spiral:

The world is dying, and we are failing to notice.  We fail to see that the world is becoming a collection of things and incidents, a lifeless expanse in which we move around lost and lonely, tossed here and there by somebody else’s decisions, constrained by an incomprehensible fate, a sense of being the plaything of the major forces of history or chance.  Our spirituality is either vanishing or becoming superficial and ritualistic.  Or else we are just becoming the followers of simple forces – physical, social and economic – that move us around as if we were zombies.  And in such a world we really are zombies.
pp.16/7 (Swedish Academy, 2019)

In such a world, reading literature has become a marginal activity as it takes far too much effort and concentration, which all makes for a rather grim outlook.

Nevertheless, Tokarczuk’s response to this crisis is a literary one, and from the start she stresses how our perception of the world comes from the words we read and write.  In an examination of how we tell our stories, she discovers a predominance of first-person narratives providing personal experiences.  Which is all well and good, but the actual result of this is a sea of voices drowning each other out, with none breaking through.  So how should we write?

Her suggestion is the need for a ‘fourth-person’ narrator, one having the perspective of all characters, seeing everything at once.  In this way, Tokarczuk envisages the cacophony of first-person narrative becoming a mosaic of interconnected parts:

So it could be best to tell stories honestly in a way that activates a sense of the whole in the reader’s mind, that sets off the reader’s capacity to unite fragments into a single design, and to discover entire constellations in the small particles of events.  To tell a story that makes it clear that everyone and everything is steeped in one common notion, which we painstakingly produce in our minds with every turn of the planet. (p.21)

If that seems a tad abstract, it’s anything but to those who have read the Polish writer’s work.  This, of course, is Tokarczuk’s chosen modus operandi, and it’s easy to see Flights and House of Day, House of Night as examples of this approach.

Interestingly, the lecture itself is written in this manner.  Starting with the anecdote of her mother on the first page, Tokarczuk weaves her own story in and out of her thoughts on literature, the Internet and the ills of the modern world, all while touching on some more loosely connected ideas.  One part features a fascinating thread of connections leading from Columbus setting sail to discover the new world to the Swedish invasion of Poland (via massive global cooling due to vegetation growth…), but it all brings us back to our starting point – the interconnection of ideas, and the importance of realising our place in the universal web.

Compared to the slightly disappointing effort of this year’s other receipient (which was half as long, much of it filled with quotations from his own work), Tokarczuk’s lecture is an excellent read (well written, and translated, of course) that gently rejects the prevailing tribalism and its dismissal of the importance of stories and myths.  More than that, it’s a call to open our minds to the world and to allow literature to bring us all together

There’s a bitter irony here, of course.  I’m writing this on Thursday, as the UK wakes up to vote in one of the most important and bitterly contested elections of the modern era.  Over the past few weeks (you could say years), the tribal and fragmented Internet society Tokarczuk mentions has been on full view, and it only serves to makes her message so much more powerful.  You see, in times like these, with everyone seemingly at each other’s throats, what can you do but try a little tenderness…