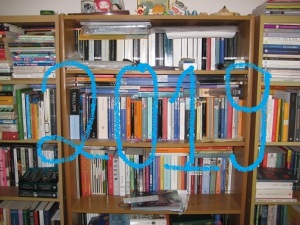 The end of 2019 marked the completion of my eleventh year of blogging, and as Tony’s Reading List moves towards the tweens, it’s time for the annual musings on the year that was and the twelve months to come.  Was 2019 a vintage year for my reading and reviewing, or has the gloss worn off the blog after so long, leaving the whole affair in need of urgent renovations?  Let’s find out in this year’s state-of-the-blog address 🙂

*****
Seen from one angle, 2019 could be considered as another successful year in which I reviewed some excellent books.  As you may have seen from my awards post, there were some old friends (Thomas Bernhard, Christa Wolf, Olga Tokarczuk) among my selections for the year, as well as several new discoveries (Ahmadou Kourouma, Kyōko Nakajima, Paulina Flores).  The end result was another hundred reviews or so, which (hopefully) have helped people find some interesting books to try, and given some overlooked gems a little more publicity – all in a year’s work.

In addition, the year saw me participating in the usual blogging events.  As well as taking part in German Literature Month in November and Women in Translation Month in August, for the eighth year in a row I was part of a shadow panel of bloggers, this year for the Man Booker International Prize.  As always, it was a great experience, and I enjoyed discussing the books with other bloggers, and providing a different viewpoint to that of the official panel.  This was certainly the case with our choice of winner, Juan Gabriel Vásquez’s The Shape of the Ruins (translated by Anne McLean: MacLehose Press), and it was nice to be able to throw our weight behind books we thought should have done better.

Another feature of 2019 for me was an increased focus on my own translations.  I started to ‘publish’ little pieces a couple of years back, and last year saw two serialised works on the blog.  For Women in Translation Month, I looked at Ricarda Huch’s long story ‘Der Weltuntergang’ (‘The End of the World’), and for German Literature Month, I went back to Eduard Graf von Keyserling with another novella (about 60 pages in my translation!) called Seine Liebeserfahrung (Experiences of Love).  As far as I can tell, neither work had been translated into English before , and I enjoyed the challenges the process threw up, even if I really could have done with slightly fewer flowers in the Keyserling story…

*****
And yet, I wouldn’t say 2019 was one of my better blogging years.  I’m increasingly feeling that the Zeitgeist has passed me by and that I could be making much better use of my time.  After a few years of decent rises in page views, this year saw a slight, but insignificant increase, while interaction, in the form of likes and comments, was significantly down.  What’s more, I’m increasingly failing to be sent books I’m interested in, ignored even in areas such as Japanese and Korean fiction, where I would expect to be at the front of publicists’ minds.

It’s partly a sign of the times, with other bookish reviewers (such as Bookstagrammers and Booktubers) receiving far more attention, and the long-review format being slightly ignored; certainly, my more popular posts tend to be more listicle than in-depth reviews.  There’s also the small matter of the importance of social media use, and I’m happy to admit that this is something I’m pretty useless at.  For anyone offering an online service, there’s a constant need to cross-promote and actively engage with followers, and I find that a struggle.  I’m the kind of person that sets off with the best intentions but soon ends up browsing and posting nothing, which leads to hours spent online for very little benefit.

Also, while I was happy with my translation efforts this year, I was deeply disappointed by the reaction to them.  The reality is that, apart from a handful of enthusiastic fans, nobody really cares about them.  Yes, I suppose classic German literature is a tad niche, and I am just an amateur, so my efforts are probably not nearly as polished as published translations, but I did think that there would be an audience, and that the serialised structure I chose would allow people to read along.  As it turned out, I was very wrong – in fact, the second week of my Keyserling project, where I posted every day (the last six parts of the story and my afterword), was easily the worst week this year, statswise, on the blog, possibly the worst week for several years.

*****
So, on that gloomy note, what can we expect from 2020?  Well, as you can tell, I’m not looking ahead too optimistically, and I’m already preparing myself for the posibility of throwing in the towel at some point – and have made a few decisions in light of that.  I’ve still got a few review copies I feel I should post on, but I won’t be chasing many more, and I’ll be trying to keep my commitments to a minimum, only accepting requests to look at books I’m really interested in.  As we get further into the year, I would expect to be reviewing far more of my own books, and far fewer of the shiny new things.

Secondly, and perhaps a little perversely, despite the lack of interest in my translation work, I’m hoping to do a bit more of that this year, which will also require a reduction in the time spent on reviews.  That’s good news for the select handful of readers who have enjoyed my efforts – not so much for those wanting to be kept up to date on new translated fiction releases.  I suspect that this will lead to far fewer reviews, and possibly more time spent rereading old favourites, too (which, of course, is always a good thing!).

Finally, it’s time to reveal the first real concrete change for 2020, namely, my decision not to participate in shadowing this year’s International Booker Prize.  While the experience is always great fun, it’s also extremely time-consuming and limiting, and given that I want more freedom, this is one way to give myself more time for what I want to do.  I’m sure I’ll still read some of the longlisted titles, but I’ll be doing so at my own pace, and with no pressure to try any I don’t like the sound of.

At present, the future of the Shadow Panel is up in the air.  I did ask former chair Stu Allen if he wanted to take over again, but he has his own plans, with a very different focus.  I’m hoping that one of the current judges will keep it going in the current format as I feel it does serve a useful function, especially when the official judges make some ‘interesting’ decisions.  It’s always good to have the books looked at by outsiders, who often view things very differently to the ‘experts’.

*****
All in all, then, it’s a slightly gloomy start to the blogging year.  Of course, I’ve thought about cutting back a little several times before and never quite managed it, so we’ll have to see whether I can stick to my plans this time around.  In any case, whatever happens this year, I’d like to give my thanks to all those who do read what I knock out a couple of times a week: here’s hoping that 2020 will be good for both literature and the wider world…