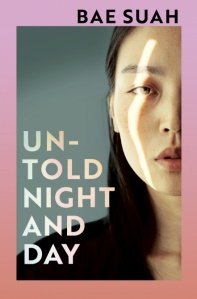 For a while, it seemed as though the two big female writers in contemporary Korean literature (from an Anglophone perspective, at least) were destined to be enjoyed by different audiences, with Han Kang enjoying great success in the UK and Bae Suah receiving critical acclaim in the US.  After The Vegetarian‘s Man Booker International Prize success, Han began to attract attention on the other side of the Atlantic, but, somewhat surprisingly, none of Bae’s work made it back across the pond.  Until now, that is, with the first of her books finally available in a UK edition – and it’s one that hasn’t yet been released in America…

*****
Untold Night and Day (translated by Deborah Smith, review copy courtesy of Jonathan Cape) introduces us to Ayami, a former actress who has worked for two years at an unusual audio theatre and library.  We catch up with her just in time for the last performance, with the small theatre about to close its doors for good, leaving Ayami jobless and slightly adrift.  Fortunately, a conversation with her German teacher, Yeoni, brings an opportunity for work, with a German writer arriving in Seoul requiring an assistant, so Ayami sets off to meet him at the airport.

Meanwhile, elsewhere in Seoul, Buha, a former businessman, roams the streets with one eye always open for a woman whose picture he saw in the newspaper many years ago.  Inevitably, his path crosses Ayami’s, leading him to be part of the audience for the audio theatre’s final performance, where he confronts her – but why?  Well, it appears that she reminds him of someone else, and he wants to find out if she’s the woman he’s been looking for.

This merely brushes the surface of the book, and as with all of Bae’s work, if that’s as far as you go, then you’re likely to leave disappointed.  Far from a simple narrative, Untold Night and Day is a four-dimensional, mind-twisting work where the readers’ assumptions about past and present, cause and effect, and fiction and reality might need to be temporarily set aside.  While fairly short, the novel is a complex piece of fiction requiring several reads to tease out possible connections and the writer’s intentions.

Ayami, the character at the centre of the story, initially appears to be a fairly straight-forward character, but as the story progresses, that certainty is replaced by confusion.  Buha’s belief that she’s the poet he’s been seeking gives us pause for thought, even though that woman must be decades older, and having been told about her failed acting career, we are later caught off-balance by her sudden appearance on screen.  Even her physical appearance is problematic, with the descriptions matching those of several other women featured in the story, including (inevitably enough) Yeoni.

Things are no less clear when we examine what’s going on around her.  The director appears to morph from a boss into a lover, and Buha pleads with Ayami not to cut him off, even though she claims the two have never met.  Meanwhile, a scene ending the first part, set at night in a city square, has Ayami and the director watching a bus speed past, the first of several such appearances.  It’s possible that there are links here to Seoul’s (and Korea’s) autocratic past, with another such night mentioned later on, and a suspicion of veiled critique of former regimes – then again, it might be about something entirely different…

Bae fans will undoubtedly enjoy the book, despite the vagueness, and for those who have experienced her work before, there are clear links to some of her other books.  As was the case in A Greater Music, Ayami’s German lessons take the dubious form of reading books aloud, and the mesmerising style of the novel, with confusion over identity, time and place, is immediately reminiscent of Recitation.  In fact,  given the similar themes of voice acting, the small theatre and a woman of indeterminate age, Untold Night and Day seems like an extension of the Seoul section of the earlier book.

Apart from Bae’s own books, what Untold Night and Day most reminded me of was the work of Can Xue.  She’s another writer whose stories are a puzzle waiting to be unravelled, and there’s a lot here similar to her last novel in English, Love in the New Millennium.  Here, too, time and space act in strange ways to form looping narratives, and every page brings new connections between characters, not all of which initially make sense.

Where Bae’s work is very different to Can’s, though, is in the writing.  In place of the Chinese writer’s abrupt sentences, deliberately confronting the reader, here we have Smith’s elegant rendering of Bae’s prose, beautifully written, drifting, never rushed.  It’s a pleasure to read, yet, surprisingly, that makes the odd nature of the story even more startling.  The reader is frequently jolted out of their reading rhythm not by the style, but by startling facts or repetition of language or events, and at times you might only realise something’s amiss after the words have sunk in.

This repetition is a major feature of the novel.  One example comes early on in a passage describing the unbearable heat of a Seoul summer night:

In cramped rooms unrelieved by air-conditioning or even a fan, if you opened the window hot air heavier than a sodden quilt rushed in, clagging your pores like the wet slap of raw meat, but with it closed the oxygen would quickly evaporate, disappearing at a frightening rate until the air was filled with nothing but heat.  Nothing but the ecstasy of ruin.
pp.15/6 (Jonathan Cape, 2020)

All clear enough, but when a few pages on the same words reappear, it has the effect of deliberately stopping the reader in their tracks (like the wet slap of raw meat?!).  There are several of these recurring sentences, and they have the effect of forcing the reader to trace the connections between the various passages.

This is the case with certain objects and ideas, too.  In the first of the four parts, during an uncanny meal Ayami has with her boss at a ‘blackout restaurant’ (where the diners are left in total darkness to eat by touch and smell), there’s a real momentary blackout when the air-conditioning fails.  This is merely the first of several such events, with Ayami’s meeting with the writer Wolfi at the airport also marked by a power outage.  The bus Ayami sees, and the people she notices inside, crop up again in a photo she is shown at a small exhibition, as well as in several stories of the past.  With other recurring themes such as stories of bodies in attics, outside swimming pools with insects and snakes on the surface and radios suddenly turning themselves on at random times, there’s plenty there to keep you guessing, but little to confirm whether your guesses are right.

It’s doubtful that any reader will be able to uncover all Bae’s secrets, but if you want more hints, you could do worse than take a look at another novel, Sadegh Hedayat’s The Blind Owl.  It’s a book that pops up all over the place, whether as the text of the final audio performances or as the book Ayami and her teacher are currently reading, and acts as a form of leitmotif for Untold Night and Day, with events from the book and the writer’s life integrated into Bae’s work.  Before the final audio performance begins, the following introduction is read out:

“Hedayat was an Iranian writer, and The Blind Owl is his major work.  The book is highly regarded, and is a pessimistic, atmospheric work filled with dreams, visions and agonies.  In particular, the mysterious repeated statements enhance the sense of the surreal, the fantastical.” (p.90)

I suspect this won’t be for everyone, but those who enjoy a challenge and prefer an active reading experience will undoubtedly get a lot from Untold Night and Day.  A deliberately disorientating work set in an urban jungle with an other-wordly feel, the novel forces the reader to work out what is real and what is not, and whether that even matters:

Buha saw no contradiction whatsoever in the gulf between dreams and reality.  (Otherwise why would we have to distinguish between them, calling a dream a dream and reality, reality?) (p.66)

And at times, that’s how it all reads, like a dream, with the line between the imaginary and the actual hard to find.  Still, it’s a lot of fun to try, and if this sounds like something for you, I recommend you take your own trip to the little audio theatre in Seoul 😉

One thought on “‘Untold Night and Day’ by Bae Suah (Review)”