After trips to Korea and Russia, our Women In Translation Month travels see us in Japan this week with two very different books.  My next post will take us back to the nineteenth century for a slow-burning psychological drama (with women firmly at the heart of the story), but today’s choice is a much lighter affair.  We’re off on a visit to a friendly place where everybody knows your name – unfortunately, it’s also a part of town where the strangest things can happen, and no one really worries about them at all.  Let me tell you a story…

*****
Hiromi Kawakami is best known for whimsical novels set in Tokyo, such as The Nakano Thrift Shop and The Briefcase (AKA Strange Weather in Tokyo), but there are times (e.g. the short work Parade) when her whimsy becomes full-blown fantasy, and this imaginative side comes to the fore in the latest of her works to make it into English, People from My Neighbourhood (translated by Ted Goossen, review copy courtesy of Granta Books).  It’s a collection of three-dozen micro stories, most running to just over two pages, connected by their setting of a sleepy unnamed suburb, presumably located somewhere in Tokyo.

However, this is no ordinary neighbourhood, and despite the writer’s easy-going, relaxed tone, most readers will soon start to wonder just what is going on.  Visitors swing by, change the town completely, then disappear again; rumours reach the locals of the government being toppled, or of meteors about to destroy the earth, but life usually goes on regardless.  There’s even (appropriately enough for the current time…) a strange disease that afflicts the locals, making them act like pigeons.  Don’t worry, though – in a few pages’ time, it’ll all be forgotten.

Readers expecting a measured heart-warming tale in the mould of The Briefcase may wonder what is going on at times, but plenty of Kawakami’s work in English, including her collection of novellas Record of a Night Too Brief, displays this tendency, and here the writer allows her imagination full rein, resulting in this clever collection of palm-of-the-hand stories.  It’s a book that’s easy to devour as you slip from one story to the next, forgetting the time, but it’s probably best experienced slowly over several days (sadly, not an art I’ve ever mastered!).

Many of the stories have a nostalgic air as the narrator looks back at her childhood, telling stories of the people and places she grew up with.  There’s her friend Kanae (and her enigmatic sister), the boys causing trouble at school and outside, and a dog terrorising the streets.  These are all lovely pieces, expertly told, but there’s frequently a sense of something a little off, especially in the abrupt way the stories end:

The school principal had a wife and two daughters.  His wife was a lawyer and his daughters both worked in banks.
“They lead such boring lives.”  He laughed, but his eyes weren’t laughing.
Occasionally, the school principal wore a wig to the park.  It was chestnut brown and parted on the side.
‘The School Principal’, p.20 (Granta Books, 2020)

That’s interesting to know, but it makes for an unusual way to round the tale off. 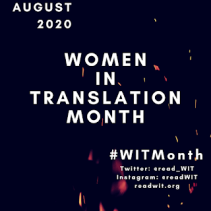 These slightly odd folk are an important part of the book.  Some of the most prominent characters include a chicken farmer spouting old-school wisdoms, the aforementioned principal (of a dog school…), Hachirō, a boy who spends his life being shuttled between families (as he is the fifteenth child and his parents can’t afford to keep him) and the owner of the local run-down bar, enigmatically called the Love, a woman who lives behind the bar and sings the same songs at karaoke every night.  We bump into them every so often, and by the end of the book they seem like old friends.

People from My Neighbourhood isn’t just an exercise in home-town nostalgia, though.  The stories occasionally go off in other directions, with some even shooting us into the future.  One example features an estate on the outskirts of town, where most apartments contain exactly six people – all well and good.  Then the story develops in an unusual manner:

The town grew more and more run down as time passed, but the estate thrived.  It seceded from Japan and formed its own armed forces, which sometimes held manoeuvres in Tokyo Bay.
‘The Six-Person Flats’, p.40

Of course they did…  In another story, Kanae’s sister, who is one of the more prominent recurring characters, joins a shadowy underground movement that manages to topple the government, for a short time, at least.  However, by the end of the piece, all is back to normal, or at least as close to normal as it gets round these parts.

In truth, I was hoping for a little more of a progression, but the stories amble along merrily at their own pace, with little concern for the wider context.  However, even if it doesn’t really go anywhere much, the book is still great fun and a pleasure to read, one that can be seen as the work of a writer enjoying herself and inviting the reader to share in the experience (which is always nice!).  Goossen’s work reads nicely here, the off-beat style coming across well, but it’s interesting that Kawakami’s usual English voice, Allison Markin Powell, is absent.  I wonder if she was busy working on another of Kawakami’s novels…

If you like the sound of a trip to a part of town where you can bet on flies sticking to pigs, people have two shadows and where there’s always the chance of a no-gravity alert (citizens, please stay indoors), then People from My Neighbourhood is well worth a try.  Yes, it does play into the current marketing trend of selling female Japanese writers as especially quirky, but it’s a nice way to while away an hour or two and does show Japanese society in a very different light.  Now, if you’ll excuse me, I have a medical appointment to attend.  You see, I have an urge to strut around and peck food off the ground – that pigeonitis is *really* contagious 😉

6 thoughts on “‘People from my Neighbourhood’ by Hiromi Kawakami (Review)”