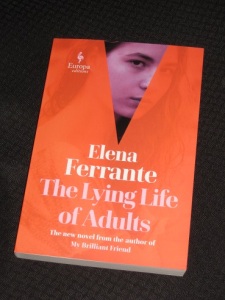 Whenever a favourite writer brings out a new book, there’s an inevitable sense of both exhilaration and dread: exhilaration from the hope of enjoying another great story, and the dread of discovering that the magic has gone.  Having enjoyed all the Elena Ferrante books I’ve read, including the best-selling Neapolitan Novels, I was awaiting the arrival of her latest work with mixed emotions, so it’s with great relief that I can announce that I really enjoyed it and consider it a successful follow-up to her earlier books.

Having got that out of the way before the review has even started, let’s take a closer look and find out what the book is all about – and what makes it such an engaging and fascinating read 🙂

*****
The Lying Life of Adults (translated, as ever, by Ann Goldstein, review copy courtesy of Europa Editions and their Australian distributor Allen & Unwin) takes us to Naples for another look at life in Italy’s south.  This time we’ve moved up in the world, with the action initially taking us to a more bourgeois area than the working-class setting of the Neapolitan Novels, and the centre of Ferrante’s attentions this time is Giovanna, a twelve-year-old girl living a comfortable life with two hard-working and highly educated parents.

However, there’s a shadow behind the family’s prosperity, that of Giovanna’s father’s working-class roots, and an off-the-cuff remark about how his daughter is coming to resemble his sister has a marked effect on the impressionable young girl.  Worried that she’s falling prey to bad blood, she begins to obsess about her Aunt Vittoria, a woman she’s never even laid eyes on, eventually plucking up the courage to ask to meet her.  Surprisingly, permission is granted, and a door opens into a world Giovanna never knew existed.  However, this broadening of horizons comes at a cost.  There’s a reason why her father and his sister don’t see eye to eye, and the young girl will find out that her aunt’s affections aren’t the only things that have been kept from her for so many years.

From the very start, The Lying Life of Adults has undeniable Ferrante traits, but there are several subtle differences, not least of which is that this time both the reader and the protagonist are outsiders looking in.  Giovanna’s curiosity at her father’s roots sends us all down a rabbit-hole, almost literally – from her home in the lofty, wealthy suburbs, we have to descend into the poorer parts of the city to continue with the story.  It’s a journey that will show Giovanna, thus far protected by her sheltered upbringing, the gritty nature of the real world.

The story is split between several settings. Up on the hill, there’s her family home and that of her friends, Angela and Ida, daughters of close friends of her parents.  Down in the ‘real’ Naples, there’s Vittoria, of course, and the strange family she’s formed with the widow of her dead lover, becoming a second mother to his three children, Tonino, Corrado and Guiliana.  The final major character here is Roberto, Giuliana’s fiancé, a respected young academic living in Milan who is the one person to successfully straddle the two worlds, and as the story progresses, he becomes someone for the young girl to look up to, and perhaps emulate.

Vittoria provides Giovanna with an entry into a new world, and despite her parents’ warnings, the young girl can’t help but be fascinated by her aunt, right from the first explosive encounter:

A shout in dialect reached me, an explosion of hoarse sounds, and goddammit, what’s the hurry, I’m coming.  Then a decisive step, a key that turned four times in the lock.  The door opened, a woman dressed all in blue appeared, tall, with a great mass of very black hair arranged on her neck, as thin as a post, and yet with broad shoulders and a large chest.  She held a lighted cigarette between her fingers, she coughed and said, moving back and forth between Italian and dialect:
“What’s the matter, you’re sick, you have to pee?”
“No.”
“So why’d you ring twice?”
I murmured:
“I’m Giovanna, aunt.”
“I know you’re Giovanna, but if you call me aunt again, you’d better turn right around and get out of here.”
I nodded yes.  I was frightened.  I looked for a few seconds at her face, without makeup, then stared at the floor.  Vittoria seemed to me to have a beauty so unbearable that to consider her ugly became a necessity.
p.46 (Europa Editions, 2020)

Giovanna is stunned by a woman so utterly different from anyone she’s ever seen before and is swept away not only by her looks, but also by her tirades in dialect (forbidden at home) and her frank accounts of her one lost love (and their sex life…).  Of course, even though she’s been warned against it, she’s also intrigued by Vittoria’s loathing of Giovanna’s father and the supposed wrongs he’s done her and her family.

After the first few parts of the book, you’d be forgiven for thinking that Vittoria is to be the star of the show, her arrival like a bomb exploding in the bourgeois existence of her relatives.  In truth, though, she’s merely a catalyst.  The Lying Life of Adults is a Bildungsroman in which Giovanna is very much the main character, and over the space of a few years, we see first-hand her transition from girl to woman.  The book is all about how she’s forced to shed the protective cocoon of her childhood, and how once the first step is taken, she finds it impossible to turn back.

One aspect of this shift is her physical and sexual development.  It starts with Vittoria’s explicit stories of her passion and moves on to childish experimentation with Angela, and as she grows up, and her body changes, she realises that boys, and men, are starting to look at her with interest, as ugly as she claims to find herself.  The large breasts that many characters can’t help but mention give her a new power, and Angela shows her how to go about using it:

Her eyes lighted up, she half closed her mouth, arched her back, thrusting her chest forward.  Like this, she said.  She wanted to talk to him with that expression on her face and in that provocative pose.  In fact, she would wear something very low-cut and a miniskirt and would nudge Roberto often with her shoulder and lean her bosom against his arm and put a hand on his thigh and take his arm when they walked.  Oh, she said, visibly disgusted, what shits men are, you just do a couple of those things and whatever age they are they go mad, whether you’re skin and bones or fat or have pimples and fleas. (pp.224/5)

It isn’t long before Giovanna decides to use her charms, flirting with Corrado and his friends, and attacting the attention of older boys at school – and someone who really should be old enough to know better…

Another feature of growing up that she discovers is adults’ propensity for lying.  It’s not giving too much away to say that Giovanna soon discovers some disturbing facts about her father, a man who had always seemed a paragon of middle-class conformity, but the more time she spends with Vittoria, the more cracks she sees in her aunt’s version of events, too.  She gradually learns to discern half-truths, to question facts that don’t add up, and as she does, she begins to construct her own lies.  Where the start of the story sees her caught out by her mother in her fibs owing to her innocence and inability to cover up convincingly, she’s soon able to weave plausible tales with the best of them.

Giovanna is another wonderful Ferrante-esque creation, and the key to the success of the novel.  She’s a young woman unafraid to show her ugly side, utterly flawed, and there’s an admirable frankness to how she reveals her lies, her fickle nature and her ability to hurt those close to her.  The story is told in the first person by an older woman looking back at her younger self with an almost ruthless objective gaze.  And yet, you can’t help but feel that this sense of full disclosure may be deceiving.  Having learned how to lie in her teens, surely this older Giovanna is using this skill to manipulate us into believing her side of the story…

Whether we can fully trust Giovanna or not, The Lying Life of Adults is another novel Ferrante fans will devour.  It’s a fascinating story of a girl’s road to womanhood as she works out where she belongs, and an introduction into the real world, that of adults, where taking people at their word is a fool’s errand:

What happened, in other words, in the world of adults, in the heads of very reasonable people, in their bodies loaded with knowledge?  What reduced them to the most untrustworthy animals, worse than reptiles? (pp.130/1)

Answering that question will take Giovanna several years, and a lot of mistakes.  Fortunately, it will only take you, dear reader, a few hours and just over three-hundred pages – enjoy 😉

All posts (unless otherwise stated) remain the property of Tony Malone. Anyone wishing to use all or part of one of my posts should seek permission before doing so.
Follow Tony's Reading List on WordPress.com
Join 3,411 other subscribers
My Tweets