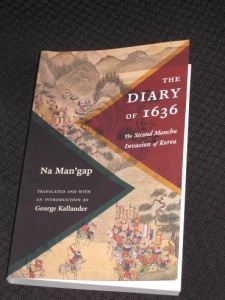 I’ve read a fair number of Korean books over the past few years, but the overwhelming majority of these have been contemporary fiction.  Today’s choice, then, marks something of a departure from my usual fare, as it’s an historical work taking us back almost four hundred years, to a time of crisis in Korean (or Chosŏn) society.  We find ourselves right in the middle of a war, and while we’re not quite out on the battlefield, things are getting pretty dicey, and confusing – it’s a good job there’s someone here to write it all down for posterity…

*****
The Diary of 1636: The Second Manchu Invasion of Korea (translated by George Kallander, revew copy courtesy of Columbia University Press) is an eye-witness account of said conflict by Na Man’gap, a scholar who held various roles in the court of King Injo.  Over the first half of the seventeenth century, the power of the ruling dynasty in China, the Ming, began to fade, with the northern Manchu people eventually relabelling themselves the Jin, and then the Qing.  When the Manchu leader Hung Taiji ‘accepted’ the role of Emperor from his people in 1636, the scene was set for a showdown – and the Koreans were unfortunately caught in the middle.

The problem was that Chosŏn was a tributary state of Ming China, and while it had promised friendship to the Manchus after the first invasion, a decade earlier, in truth they had merely paid lip service to this vow, continuing to support the Ming and building up their defences in preparation for any subsequent attack.  By 1636, Hung Taichi and his Manchu armies had had enough, and after a number of diplomatic slights at the Korean court, they poured over the Korean border to set matters right – which is where our friend Na comes in…

The Diary of 1636 is, in part, exactly that.  It consists of a variety of accounts concerning the brief war, with the bulk of the text comprising Na’s daily reports from inside Namhan Mountain Fortress, where King Injo and his court were holed up, besieged by the main forces of the Manchu army.  Prior to the start of the conflict, Hung Taiji makes his intentions very clear:

The reality is that the Korean defences are totally inadequate, and even their strategy of preparing a series of fortresses to retreat to proves to be a disaster, mainly because of poor infrastructure and administration.

A large part of this section of the book involves exchanges of letters between the invaders and the besieged Koreans.  There is the odd battle around the fortress walls, but with his forces elsewhere successful in holding off any hope of reinforcements, the Emperor and his generals are content to wait and make the King bow to Manchu demands.  The letters that pass between the Koreans and the Manchus form a conflict in their own right, an epistolary war, if you will, in which the locals attempt to downplay their sins and the invaders seek to cow the enemy, whom (of course) they simply wish to show the correct way to behave.  In this battle of the wits, as in the real conflict, the Koreans come off decidely second-best.

Supplementing this lengthy diary section are several other summaries of war-time events, and of their consequences, that Na penned after the war had ended.  Some concern the fate of court officials, with those who incited war being sacrificed and punished (mainly by other officials hoping to save their own hides).  Another of the prominent sections concerns the fall of Kanghwa Island, the fortified emergency court that was the King’s original destination.  Here Na explains how Kim Kyŏngjin, the official responsible for its defence, betrayed the trust placed in him, meaning the island fell even before Namhan did.

*****
As fascinating as the diary and these accounts are, they can be a slog at times, with a lot of unfamiliar names and transcripts of petitions to the king (Chosŏn officials did love to send off petitions…), but fortunately Kallander’s introduction, running to around seventy pages, helps us to understand what’s going on. The translator explains the significance of Na’s writings:

As sources disappeared, and those who witnessed the events passed away, the works that remained became important for the retelling of the past.  Na’s position at Namhan Mountain Fortress as witness to the invasion, and his deep familiarity with the political and military situation, contribute to the signficance of his diary. (p.xv)

The ‘deep familiarity’ Kallander mentions here comes from his many years of service at court and the close relationship he had with King Injo, even if he was often in trouble for his frank views.

One of the more fascinating aspects of the introduction is the light it sheds on Chosŏn politics and how infighting led to the country’s weak response to the Manchu invasions.  Kallander paints a vivid picture of a powerless king surrounded by a squabbling court, where officials spend their days thinking of how to get rid of a potential rival and shore up more power for themselves.  Meanwhile, little attention is paid to practical matters, such as organising the army and making sure the fortresses are properly supplied:

Na hints that defeat was avoidable.  In considering the aftermath, he attributes the loss to a number of factors, from an army suffering from low morale and poor leadership to a single corrupt official, Kim Kyŏngjing, whom Na and others blamed for the fall of the country.  This was an exaggeration to say the least, but a relatively safe accusation in the postwar environment that sought to assign blame. (p.xxiv)

This idea of a political society squabbling for personal gain while disaster looms in the wings makes for disturbing reading.  Still, at least that sort of thing doesn’t happen in our enlightened times, no?

I’d hesitate to recommend The Diary of 1636 to the casual reader as it probably demands a certain amount of interest in Korean history, more than most will possess.  However, anyone who does enjoy reading in this area will no doubt appreciate it, especially with Kallander’s excellent introduction helping to put Na’s writing in perspective.  Overall, it’s an intriguing look at an event Kallander describes as a dividing line between early and late Chosŏn, as the country’s loyalties were forcibly shifted from one Chinese dynasty to another – and also a reminder that if you’re a small country located near a large one, it isn’t always that easy to get on with your neighbours 😉