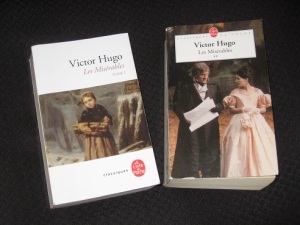 When my daughter picked up a lengthy classic novel last year and devoured it in a couple of weeks, I was inspired to do the same, and managed to source a two-volume second-hand copy online in preparation for what would be a far longer journey.  You see, while young Emily read the translation, I was determined to try the original, which meant this wasn’t a project I’d be knocking off quickly.  As it turned out, though, I’ve had a fair bit of spare time on my hands this year (like most people…), so while I carried on with my usual reading and reviewing, I continually came back to my pair of bricks, eventually managing to finish the book about a week ago.  It was definitely worth the effort, even if it was a bit of a struggle at times, and today, I’ll tell you all about the journey 🙂

*****
Victor Hugo’s Les Misérables is a story most of you will be familiar with, even if you haven’t read the book.  We begin back in 1815, when Jean Valjean, an escaped prisoner, has two encounters with people he meets along the path of his flight, meetings that inspire him to turn over a new leaf and devote his life to helping others.  He adopts a new identity and creates a business that employs hundreds of workers, raising them out of poverty, and when one of them, a woman called Fantine, dies after being wrongly dismissed, he tracks down her daughter and raises her as his own, with the young girl, Cosette, growing into a beautiful young woman who is a comfort to Valjean in his old age.

Alas, the story doesn’t run quite as smoothly as I’ve made it sound.  While out of sight, the escaped prisoner certainly isn’t out of mind, especially for the dogged Inspector Javert, an inflexible career policeman whose obsession with Prisoner 24601 comes to dominate the lives of both men.  With Javert ever on his heels, Valjean is forced to flee, hide away in the most unlikely places and adopt several new identities in an attempt to evade his pursuer.  Then, just as our hero begins to think himself safe, new dangers emerge.  Cosette begins to turn her attentions from her ‘father’ towards a young man she meets on walks around the parks of the French capital; meanwhile, in the Parisian streets of 1832, the people are getting restless, and Valjean and those around him are about to be sucked up into a whirlpool of revolution and violence.

As I’m sure you’d agree, that’s a lot to get your head around, which is why I’ve been taking my time.  Over the past six months or so, I’ve slowly made my way through the two volumes you see above, with the novel actually divided into five parts, each containing a multitude of chapters.  My edition also came with footnotes aplenty, many of them lengthy ones, plus around sixty pages of analysis at the end in the form of an overview of themes and an extended essay (the French don’t mess around with their budget classics).  The translated versions tend to have a lower page count, usually clocking in at somewhere between 1200 and 1400 pages, depending on the edition, but that’s still a lot of reading.

Of course, one of the reasons for the length, quite apart from the epic tale itself, is the fact that Hugo liked to take his time with his stories.  Take this gem from near the start of the novel:

In 1815, Monsieur Charles-François-Bienvenu was the Bishop of Digne.  He was an old man of around seventy-five years of age; he had occupied the seat in Digne since 1806.
Although this detail has no real connection with the story that we are about to tell, it is perhaps not without use, even if only for the sake of completeness, to touch upon the rumours and stories about him which were making the rounds at the time he arrived in the diocese.
*** (my translation)

Before the unwary reader has the chance to say, “Well, if it’s OK with you, Vic, I’d be happy for you to skip right on to the part where Jean Valjean appears”, Hugo makes good on his promise (or threat), and we spend the next seventy pages learning about a man who, after the first few chapters, virtually disappears from the book.  Which, frankly, seems a little odd. 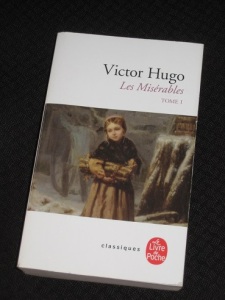 The bishop’s background is far from the only lengthy digression Les Misérables has in store for its unwitting readers.  The most famous of these is the monstrous section on the Battle of Waterloo, a masterly description of how the battle unfolded, as well as why, to quote ABBA, Napoleon did surrender (surprisingly, rain was partly to blame).  These tangents don’t always come at opportune moments, though.  At one point, our hero is caught in a tricky situation and flees with another major character, with the reader wondering whether they’ll come through unscathed.  What comes next?  A thirty-page history lesson on Parisian sewers…

Of course, there is a point to it all, and the further you get into the book, the more the rhythm starts to make sense, with the writer swinging back and forth between his creations and the society they live in.  Les Misérables was first published in 1862, making it historical fiction, and Hugo was using the book to look back on the world of his youth and make sense of how society has developed, for better or worse, over the past half century.  It’s a remarkably ambitious look at society as a whole, and even if there’s a sense the writer is trying to pack too much in at times, it’s a valiant attempt to produce a snapshot of his country and how life had changed since the events of Waterloo.

The main sections usually start with a lengthy philosophical preamble in which Hugo sets the scene, before he returns us to the action, with his characters now entering the stage he has just, in great detail, described.  These tangents, as distracting as they can be at times, do have more to them than might first appear to be the case.  The section on Waterloo, for example, ends with an introduction to a familiar face and a plot twist to be revealed fully hundreds of pages later.  In addition, it also proves to be a set up for the later battle for a Parisian street barricade, with parallels between the two ‘conflicts’ even down to how Hugo describes the terrain of the ‘battlefield’.  It doesn’t always work (occasionally the foreshadowing takes away from the drama of the action), but it certainly helps create a fuller sense of the setting.

One important point to remember about Les Misérables is that the famous title can be rather deceptive for Anglophone readers.  While it may conjure up images of being kept inside by a runny nose on a rainy Sunday, the truth is that the French words have a far stronger meaning; these misérables are the down-trodden, the dregs, the lowest layer of Parisian society, the people that serve to keep the rest of the city afloat while being crushed into the mud themselves.  In my edition, in a letter to the editor of the Italian version of the book, Hugo stresses the universal nature of his work:

Wherever a man is ignorant and desperate, wherever a woman sells herself to buy bread, wherever a child suffers for want of a book to guide them and a shelter to keep them warm, the book Les Misérables will knock at the door and say: Open up, I have come for you. (***)

There have been attempts to explain this in some translations, such as Christine Donougher’s 2013 version, which she called The Wretched.  Alas, given the appeal and fame of the original title, any alternative seems virtually doomed to failure.  A recent BBC TV adaptation used Donougher’s version for the tie-in book – would you like to guess what title they went with for the new edition?

As befits such a substantial novel, Hugo’s novel has a wide supporting cast, but while many characters are mentioned over the course of the story, not all that many actually stay for long.  One feature of Les Misérables is for people to come and go, with characters like the good bishop, Fantine and the young revolutionaries (les amis de l’ABC) not taking up as much room as you would suspect.  Some stay a little longer, such as the urchin Gavroche and his unfortunate sister, Éponine, while others, like the sinister Thénardier, do pop up repeatedly over the course of the novel.

In fact, Les Misérables often feels like several different novels in one, held together by the presence of the runaway jailbird and the shadowy presence on his heels.  Jean Valjean is at the center of it all, the epitome of these misérables, a man jailed for stealing bread to feed his brother and whose prison term was extended after several failed escapes he didn’t really want, or need, to attempt.  Hugo doesn’t exactly try to hide his book’s Biblical parallels, with Valjean’s conversion taking place on the road, not to Damascus, but to Paris, and there are also several places where the writer hints at his creation’s Christlike qualities.  Valjean performs miraculous feats on more than one occasion and later is known for his charity work (he doesn’t like to talk about it).  Topping all this off is one of the most memorable scenes I’ve ever read, in which we experience a literal return from beyond the grave…

Yes, Jean Valjean is a wonderful character, and Les Misérables is, quite simply, one of those rare books that defies a review, as any feeble attempt at such will merely end up scratching the surface of a bonafide classic.  Despite the issues I had at times with some of the language (my knowledge of nineteenth-century French terms for tools, parts of vehicles and household utensils isn’t all it might be), and the odd passage where most readers would be forgiven for being tempted to skip a page, or fifty, it was an enjoyable experience, and I fairly sped through the last book and the culmination of the story.  I’d certainly recommend putting some time aside to give Hugo’s epic a try, even if you’ve seen one of the stage or screen adaptations, and if you’re brave enough to plunge into the original version, the best of luck to you.  Just remember – as much of an endeavour as it might seem at times, it’s nothing compared to what poor Valjean goes through.  Bonne chance 😉