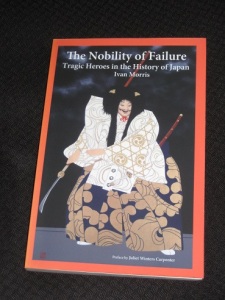 After some trying times in Tokyo, we’re leaving fiction, and the modern world, behind for a while to go back in time, in several senses of the word.  Today’s choice is actually another neglected review copy, one I received almost a decade ago.  While I never quite found time for it, it’s probably for the best as my J-Lit reading over the years means I’m probably in more of a position now to appreciate it.  Let’s take a look, then, at some famous people from Japanese history, with our guide a man who certainly knows what he’s talking about.

*****
My first experience of Ivan Morris’ work came in the form of the anthology he edited, Modern Japanese Stories, and I’ve also read a couple of his translations, including As I Crossed a Bridge of Dreams and The Temple of the Golden Pavilion.  However, he was also a respected academic, and The Nobility of Failure: Tragic Heroes in the History of Japan (review copy courtesy of Kurodahan Press) has become a classic work.  It’s a close look at Japanese history and in particular a tendency Morris has identified, the concept of hōganbiiki, or sympathy with the loser.  Morris describes the appeal thus:

Much of the appeal of the hōganbiiki type of hero derives from this contrast: it is because he has such a great distance to fall that the hero’s failure stirs the emotions.
‘Ōshio Heihachirō: Save the People!’, p.137 (Kurodahan Press, 2013)

The book is built around this national trend whereby it’s those who are defeated, rather than the victors, that are remembered and honoured by later generations.

The ten chapters provide character sketches of notable figures through the ages.  Starting with the legendary (in more ways than one) 4th-Century warrior Yamato Takeru and passing by men such as the unfortunate 14th-Century general Kusunoki Masashige, Morris highlights the rise and fall of some fascinating people.  Later on, we meet larger-than-life individuals like Saigō Takamori, perhaps the last of the true samurai, before finishing with one last futile cause, represented by a generation rather than an individual – the kamikaze pilots of World War II…

These are all Morris’ personal choices, of course, but the selections work well.  The early chapters are akin to legends in places, Japanese equivalents of Arthurian tales or Robin Hood stories, but we soon move on to firmer historical ground with several familiar tales, common in Japanese history, of power struggles between powerful clans.  Many of the tragic heroes here found great success in battle or at court before either being betrayed or simply finding themselves on the wrong side of history, making their downfall even more poignant.

For anyone with an interest in Japan, there are some very familiar names here.  One prime example is the charismatic Minamoto no Yoshitsune, one of the most dashing characters in The Tale of the Heike.  After his exploits at the Battle of Dannoura in 1185, at the peak of his fame, his elder brother Yoritomo decides little brother’s too dangerous to be trusted, with inevitable results.  Having been rejected by Yoritomo, Yoshitsune attempts futile resistance, and it all ends in a blaze of glory, and death.

This story is typical of most of the cases depicted in The Nobility of Failure as what marks these heroes is the fickle nature of those close to them.  This isn’t always a bad thing, and often those changing sides are rational politicians doing what’s best for the clan or country.  Yet the Japanese, it seems, prefer a noble loser to a vindictive winner, even when the tragic rebel was clueless and obviously on the wrong side of history:

Predictably enough, Ashikaga Takauji, the victor of Minato River, who successfully founded a new shogunate and who by any objective standards must be ranked as one of the truly creative men of his time, was vilified by later generations and his name became a byword for treachery.  During the Restoration period statues of him in Kyoto were decapitated by loyalist warriors, and in the 1930s a cabinet minister was actually obliged to resign from the government because he had written a pro-Takauji article in a magazine.  Such are the posthumous rewards of failure and the perils of success in Japan.
‘Kusunoki Masashige: Seven Lives of the Nation’, p.82

It’s a story repeated throughout the book, with the winners, who frequently took Japan in a better direction, often reviled and scorned.

Of course, what makes these stories work is their ending, and one thing the featured ‘heroes’ have in common is the ability to realise when their time has come, and the courage to accept death unflinchingly:

Since defeat was such a likely outcome of the warrior’s way and capture such an unthinkable disgrace, it is logical that suicide should have become accepted as the honourable death for the failed hero.  Hardly a single hero in the Western world has ended his life by voluntary suicide.  But since the earliest recorded period of Japanese history a warrior’s self-destruction was accepted as a release from shame, an act of honour and courage, and an ultimate proof of integrity.
‘Yorozu: The Emperor’s Shield’, p.12

Without understanding this key point, it might be difficult for some readers to grasp just why these people are revered above others, especially when Morris makes it quite clear that they often had no real idea of what they wanted to achieve with their insurrections or rebellions, and that the country was far better off with them out of the way.

Although The Nobility of Failure is structured in the form of sketches of individual characters, it actually makes for a handy guide to Japanese history as a whole, with many of the major events of the last fifteen-hundred years covered.  Morris expertly places the protagonists in their context, explaining what led to their rise and fall, and what happened next, and while there are a few gaps (there’s little here, for example, on the pivotal Battle of Sekigahara in 1600), most major events are explored.  I was fairly familiar with the later era, but much of the early stories were new, especially those set in the quasi-historical period featuring the 6th-century warrior Yorozu  and the sad story of 7th-Century prince Arima no Miko. 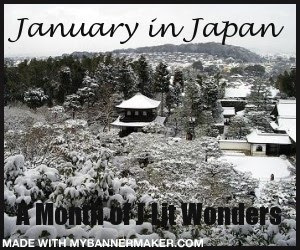 As a lover of Japanese literature, though, what I enjoyed just as much as the history were the links to books I’ve enjoyed in the past.  Last year I read Shūsaku Endō’s Sachiko (tr. Van C. Gessel), and the final chapter here on the young kamikaze pilots is an excellent companion to that book, revealing more on the psychology of those who volunteered for the missions.  One of my final reads for last year was a second look at another Endō novel, the superb Silence (tr. William Johnston), and here we’re treated to an excellent examination of the Shimabara rebellion that preceded that story, learning the horrifying true story of the Christian uprising and massacre.

And yet there’s one other literary link that’s perhaps slightly less obvious, although possibly intentional.  The Nobility of Failure was written in the early seventies, shortly after the death of another tragic figure, Yukio Mishima, and it’s clear that Mishima, a close friend of Morris, was on the writer’s mind while he was working on this book.  In addition to a mention in the introduction, there are also appearances in a couple of the later chapters.  There are obvious parallels with the Kamikaze pilots, of course, but the connection is most obvious when discussing Ōshio Heihachirō’s failed uprising in Osaka in 1837, and his philosophy is specifically linked to Mishima.  We learn here of the sincere act, where the success or practicality is irrelevant, and readers with good memories may be able to follow these ideas back to another Mishima novel, Runaway Horses (translated by Michael Gallagher) – those with *exceedingly* good memories might even recall Heihachirō’s role in that book…

This Mishima angle is merely the final decorative bow on a wonderful book, one anyone with a more-than-superficial interest in Japan will love, and I certainly wish I’d found time for this earlier. It’s both a useful summary of major events in the country’s history and an introduction to the figures that tower over the historical and literary landscape.  Perhaps most interestingly, though, it’s also a reminder that while history may be written by the winners, it doesn’t always remember them kindly, even if they did manage to keep their heads.

2 thoughts on “‘The Nobility of Failure’ by Ivan Morris (Review)”