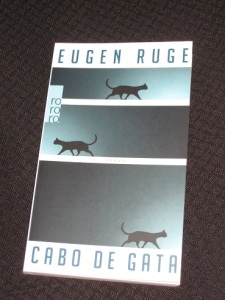 While I have plenty of review copies to be getting on with, I do have a few of my own books lying around, too, and with that in mind, I decided that this week’s theme would focus on those, in particular some of my German-language books.  All my choices are by writers whose work I’ve enjoyed in the past, but of course, past success is no guarantee of future performance.  Let’s kick off the week, then, with an outing to Spain, where there’ll be sun, sand and – cats?

*****
After enjoying Eugen Ruge’s prize-winning debut novel In Zeiten des abnehmenden Lichts (In Times of Fading Light), I happily ordered another of his books – and just as happily left it on the shelf for years.  As it turns out, Cabo de Gata is a very different book from its predecessor, with the writer moving from a measured, multi-faceted take on the history of an East-German family to a much lighter story of a writer and a mild mid-life crisis.  One morning, when the forty-year-old radio script writer Peter gets up to begin his usual routine, he has a sudden moment of clarity, realising that he’s about to do exactly what he has every day, for the longest time.  A little off-balance, he goes out for breakfast instead, and by the end of the meal, a decision is made:

That was, I think, the moment when the thought occurred to me of leaving this town (this country, this life) for a while.
*** (my translation)

It might take him a while to get organised and fill out the required paperwork (he is German, after all), but eventually, at the end of the year, he heads south on a new adventure.

But where to?  Initially, he makes Barcelona his destination, but after a couple of days in the big city, he decides that whatever he’s looking for isn’t there.  It’s at this point that fate once again lends a helping hand.  During another lengthy café breakfast, the proprietor kindly hands him a Spanish newspaper, and even if the traveller can’t really read the language, he can decipher the weather report, deciding to move on to the warmest place on the Iberian peninsula.  That’s right, we’re off to spend the winter in Cabo de Gata…

I suspect regular readers will already be sensing that I’m not really taking this review as seriously as usual, and I might as well come right out and admit that I found Cabo de Gata a disappointing read.  Given the serious tone of Ruge’s first book, and the information in the back-cover blurb, I thought this would be a thought-provoking, quiet novel, perhaps a Murakami-type story of a man running away to face up to the demons within (although that may just have been the mention of a cat).  Instead, what we have here is a misguided attempt at an ‘amusing’ short novel, where a man decides it’s time for a change and then does nothing but bum around the beach for several months.

The novel is actually written as a sort of extended flashback, the reflections of an older man looking back fifteen years to a turning point in his life.  A notable feature of the book is the frequent repetition of the phrase Ich erinnere mich… (‘I remember…’, ‘I recall…’), constantly bringing us back to the older man sitting in an aeroplane, tapping away in his notebook in an attempt to pin down his memories.  It has a slightly distancing effect, and in effect the writer is looking back at a different self, and a very different life.

There are times when this does work, and some of the most effective humour comes when he’s being self-deprecating, looking back on his foolish younger self:

I sit down at the bar, order a coffee.  The espresso machine briefly hisses, then once more there’s only the whistling of the wind, the rattling of the door, to be heard.  The woman is silent, I’m silent, I slowly drink my coffee, and if in these drawn-out minutes I regard myself as a character from a film, perhaps that’s because I keep my hat on for the whole scene. ***

The retrospective approach allows the writer to gently mock the figure of the pompous traveller spending his winter on a distant coast in the hope of inspiration for his work.  Of course, his plans come to nothing as he spends each day in the same way, in effect simply moving his breakfast routine a thousand kilometres southwards.

Sadly, the writer doesn’t confine his critical eye to his younger self, and it’s when Peter writes about other people that the tone turns more predictable, and occasionally insulting.  An early indicator of this is when he introduces the mother of his daughter (who seems to cross his mind on very few occasions once he sets off on his journey).  Left to look after the young girl while the mother heads off to a party, his jealousy has him imagining his ex looking for a man to perform a certain sex act on, just as she did with him on their first evening together – which we really didn’t need to know.

Later, down in Cabo de Gata, there are more uncomfortable moments, as he can’t seem to introduce a new character without having a subtle (or not so subtle) dig at their appearance.  In addition to stereotyping and insulting a couple of fellow travellers (from England and the US), there’s a running ‘joke’ whereby he stares as the backside of the waitress who brings him his lunch every day.  When I tell you that this character is mainly referred to as ‘the fat-arsed waitress’, you’ll see that the comedy isn’t always from the top draw.

These failed attempts at humour (which reminded me, involuntarily and painfully, of another less-than-stellar German book…) aren’t the only issues here.  After a very slow start, in which it takes our writer friend almost a quarter of the book just to get out of Berlin, there’s very little actual plot to speak of.  When a complication of sorts does arrive, it turns out to be a cat, which may or may not have something to do with Peter’s dead mother.  At this point, I began looking around to see what others thought of the book, and it wasn’t hard to find negative reviews.  It seems that I’m far from alone in having my doubts about this one.

It’s a shame that Cabo de Gata was such a let-down.  I loved Rugen’s first book, and there are bits and pieces here that hint at a writer who can tell a tale when he wants to, but overall this one’s just a whiny mid-life crisis story that reeks of privilege.  However, in an attempt to look on the bright side, I did get something out of the experience – at least I’ve found my first turkey early this year 😉