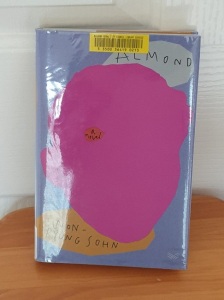 A good while back, the online Korean book club I occasionally frequent chose Won-Pyung Sohn’s Almond (translated by Sandy Joosun Lee) for the monthly meeting, and seeing that it was available at my library, I dutifully put a hold on it.  Alas, for whatever reason, it didn’t arrive in time, so I wasn’t able to take part in the meeting (which has happened several times now, for a number of reasons).  However, a couple of weeks ago, just when I’d forgotten all about it, I got a message telling me that my ship (well, book…) had come in, so it only seemed right to give it a go, anyway,  Was it worth the wait?  Let’s find out…

*****
Almond is the story of Yunjae, a boy trudging through life at a distinct disadvantage.  At an early age, he’s diagnosed with Alexithymia, a condition where people are unable to identify or express their feelings, and the almond of the title refers to the underdeveloped almond-shaped amygdalae in his brain (which his mother attempts to grow by feeding her son almonds…).  As you can imagine, this makes fitting in hard, and people tend to react badly to someone who has to learn to act interested or happy in the appropriate situation.

Things go from bad to worse when the boy loses his mother and grandma in a violent attack shortly before he’s due to start high school, and when a well-meaning teacher reveals his identity, it all backfires, his lack of emotion regarding the tragic event making everyone shun him.  And that’s even before a new boy arrives at school, one with a short fuse and a reason for wanting to provoke a reaction from the hapless Yunjae…

Sohn’s novel runs to just over 250 pages, but the short chapters and easy style means it’s a fairly quick read, a book I sped through in a day.  It definitely falls into the YA category, so if that’s not your thing, consider yourself warned.  The final third in particular, where a new character is introduced, and everything seems to come together a little too easily, might leave some readers a little disappointed.

For the most part, though, Almond is an interesting story, told through the eyes of a teenager for whom life is something that must be studied rather than lived, like a foreign language that simply won’t sink in.  Yunjae isn’t dumb, though, and he realises that the ‘lessons’ he endures aren’t solely to benefit him:

Mom said everything was for my sake, calling it love.  But to me, it seemed more like we were doing this out of her own desperation not to have a child that was different.  Love, according to Mom’s actions, was nothing more than nagging about every little thing, with teary eyes, about how one should act such and such in this and that situation.  If that was love, I’d rather neither give nor receive any.
p.30 (HarperVia 2020)

He does his best to follow instructions, and even if he’s never likely to fit in, he at least manages to get by.

The complication in the story arrives in the shape of Gon, a teen who was kidnapped as a child and then grew up to become a juvenile delinquent.  From the start, he has a reason to hate Yunjae and decides to torment him until he shows some emotions.  It’s only when he realises that this simply isn’t possible that he takes a step back and begins to become interested in the boy behind the impassive facade, hanging around the bookshop Yunjae’s mother used to run, trying to work out what makes him tick.

At the heart of the book, then, is the relationship between two very different teenagers, brought together by a strange twist of fate.  Gon’s determination to get through to Yunjae seems to be working, making him feel he should reciprocate and visit him.  In fact, there’s a sense that Yunjae is starting to change, becoming more aware of what’s happening both around him and inside:

I turned off the light and breathed in the book smell that still lingered.  It was as familiar as the background surrounding me.  But I noticed something slightly different carried on the scent.  Suddenly a small ember was rekindled in my heart.  I wanted to read between the lines.  I wanted to be someone who truly understood the meaning of an author’s words.  I wanted to know more people, to be able to engage in deep conversations, and to learn what it was to be human. (p.199)

Which is nice enough, but it all feels a little too neat, too convenient.  In the writer’s brief notes at the start of the novel, she explains how she decided to base Yunjae’s progression on new studies suggesting that training can help some people to improve the function of their amygdalae – I think I would have been more interested if that hadn’t been the case.

One way in which Sohn stops the story from becoming too ‘nice’, though, is in the small number of rather violent scenes.  These incidents act as landmarks in the book as Yunjae moves from one aggressive act to the next, and some readers may feel rather disturbed.  As was the case in Mieko Kawakami’s Heaven, we are shown how brutal teenagers can be, and Yunjae’s life seems to consist of moving from one beating to the next, either as a witness or a victim.  Yet, in the end, these attacks also act as a form of catharsis, and he generally emerges from them in a better place.  I’m not sure that’s a great lesson for the writer to be giving us…

Overall, then, Almond is an engaging read, and in her first full-length translation, Lee does a great job, working hard (as she says in her note at the end of the text) to ensure Yunjae ‘consistently sounds emotionally removed but not dull‘.  That’s definitely the case, and even if it was all a little too easy at times, there’s enough here to interest most readers and make it worth a try…

One thought on “‘Almond’ by Won-Pyung Sohn (Review)”

All posts (unless otherwise stated) remain the property of Tony Malone. Anyone wishing to use all or part of one of my posts should seek permission before doing so.
Follow Tony's Reading List on WordPress.com
Join 3,387 other followers
My Tweets