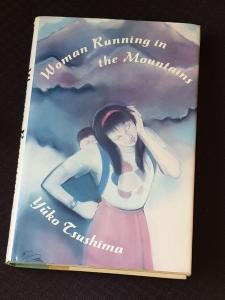 My last post looked at a grim portrait of death in war-time Japan, but fortunately, today’s Women in Translation Month offering sounds a little lighter, with a focus on new life in more ways than one.  A happier affair, then?  Well, this being Japan, nothing’s that simple.  Yes, we get to celebrate the birth of a child, but as you’ll see not everyone’s happy about the new arrival, meaning we’re in a for a rather rough year…

She made her way along the street with her shoulders back and head high.  In the three months or more since her size had been noticeable, Takiko had never once walked along the alley with her head down.  Even on rainy days, when there were puddles everywhere, she hadn’t lowered her eyes.  She refused to lower her eyes before “the neighbours” – those people who had made Takiko a sorrow to her mother because her mother cared what they thought.  She felt that by holding herself in this way she was directly supporting the fetus inside her.
p.6 (Pantheon Books, 1991)

The reason for this solitary departure and upright posture soon becomes clear.  Not only is Takiko pregnant and unmarried, there’s not even a sign of the father (who isn’t even in Tokyo) throughout the novel.  The mother-to-be is determined to go through with the birth alone, and raise the child herself.

The birth goes smoothly enough, but it’s after the calming time spent at the hospital that the problems arrive.  Takiko takes her baby son back to a family simmering with tension and must soon start to address the issues of work and childcare.  To add to all that, it turns out that baby Akira has a minor health issue, one that will require surgery later, and money first.  Takiko isn’t the sort of woman to give up, though, and she steels herself to begin her fight to make her new life work.

Woman Running in the Mountains is a novel with a very familiar Tsushima focus, that of the single mum fighting against a prejudiced society, and while it’s a later work than Territory of Light and Child of Fortune, it actually seems to be a predecessor of sorts.  Where the later books looked at a mother and an older child, this one covers the first year of the child’s life.  Over the course of the twelve months, from one summer to the next, we’re shown the problems Takiko faces in getting through a difficult period unscathed.

From the start, Takiko finds herself fighting against pressure from both within and outside the family.  Her mother pleads with her daughter to get an abortion, and when it’s too late for that, she moves on to trying to get her to adopt the child out.  Takiko’s father, a violent man with little to live for, is more of a problem, prone to occasional outbursts of violence, and the grace period directly after the birth is a rather uneasy one.  Tsushima skilfully builds up the pressure-cooker environment of a small house with four adults, and we sense it’s only a matter of time before it all blows up.

Her own family might not be an ideal example, yet Takiko can’t help but notice the advantages of the two-parent model, seeing the difference between her situation and that of other families:

Inside the station, she at last sighted several people in kimono for their New Year shrine visits.  Families dressed up to go out also caught her eye.  By the fourth day of the holiday people were probably ready for a family outing.  Fathers with children in their arms, mothers cautioning them about one small thing or another.  Harried fathers piggybacking their children, mothers bringing up the rear with armfuls of belongings and equally bad-tempered expressions.
Akira, on Takiko’s back, was fast asleep. (p.155)

Determined to make her own way, she wastes no time in getting her own family register.  However, there’s no name in the space left for Akira’s father, and this proves to be an issue when she applies for work, a black mark against her name.

Even when Takiko does get a job, though, the life of a single mother makes it difficult to balance work and childcare, with both sides unable to compromise.  The young woman finds herself running from one to another, and in the end her first jobs at a café and as a make-up saleswoman prove to be unsuccessful.  It’s only when she stumbles across a beautiful garden in the suburbs that she begins to find her way.  Her next job is a rather unusual role for the former office worker, but one that proves to be just right for her.

A familiar Tsushima trademark apparent here is the writer’s handling of feelings, sensations and colours.  Even in the middle of a hectic day, Takiko always finds the time to (literally and metaphorically) smell the roses:

Squinting at its brightness, Takiko descended the slope.  The sun was shining directly before her, full onto her body.  She smiled.  No one was aware of her joy at this instant – not her mother, not her father, not a soul.  She didn’t think there could be any moment more luxurious than this.  The sunlight felt good on her body.  A hot midsummer’s day was about to begin. (p.8)

Other examples of heightened sensations include the taste of the peaches her mother brings her in hospital, the vibrant colours of the trees she sees from the window and the warmth the young mother feels when holding her child.  Her days may be rushed and busy, but no one could accuse Takiko of not living in the moment.

One aspect of Woman Running in the Mountains to be aware of is that it’s definitely a story of another time, written in 1980 and translated a decade later.  Modern readers may well be surprised by the negative attitudes towards the single mother, the drinking and smoking while pregnant (and around the child) as well as the father’s beatings, which always come as a shock.  Perhaps more disturbing to some will be the casual use of the words ‘retard’ and ‘retarded’ in the English text to describe a child with a mental disability.  Harcourt’s work is generally excellent, as usual, but this labelling is a reminder that language changes over the years, as does acceptable behaviour.

Given the Tokyo setting, you might wonder about the unusual title, but it comes from the protagonist’s frequent dreams of life away from the big city.  She sees herself living her days out back in her mother’s home town, leading a simpler life up in the mountains.  Surprisingly, she gets a taste of this in the second half of the book, when she and a fellow worker (of north-country origins himself) take a work trip to the ‘mountains’ outside Tokyo.  It’s only a brief break from her routine, but it’s enough to give Takiko a look at a different kind of life.

Woman Running in the Mountains is another intriguing story of the life of a single mother in Japan, and those readers who have enjoyed Tsushima’s other work in English should definitely give it a go – if possible.  You see, it may be difficult to track down a copy as this is, alas, yet another out-of-print book by a female Japanese writer. Hopefully, someone will see fit to reissue it at some point, as it’s well worth the effort, and I’m sure there’ll be many readers who would love to give it a try.