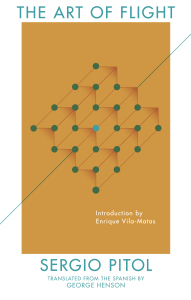 It’s July already, which means it’s time for Spanish-Language Literature Month once again.  Stu, of the Winstonsdad’s Blog, and Richard, from Caravana de Recuerdos, are hosting the event, giving literature lovers all over the world the opportunity to absorb themselves for a month in the wonders of books from Spain, Latin American and beyond.  This year, I’ve managed to get myself organised in good time, and my contribution will be spread out equally over the five #TranslationThurs occurring this month – five Thursdays, five books -, starting today.  Preamble over – let’s see who’s first up on my adventures in Español…

*****
Sergio Pitol is a legendary Mexican writer, whose ability and fame are best explained by noting that he has won both the Herralde and Cervantes Prizes.  Scandalously, none of his novels have appeared in English thus far, but this year saw the publication in English by Deep Vellum Press of the first in his trilogy of memoirs.  The Art of Flight (translated by George Henson, review copy courtesy of the publisher) is, then, the first lengthy exposure the Anglophone world has had to Pitol – and it’s certainly not a bad place to start.

The Art of Flight is a non-fiction work running to around 390 pages, but it’s certainly not a book to charge through.  It’s divided into four main sections, with each sub-divided further into short (at times, very short) sections.  Rather than needing to push on, the reader has the comfort of being able to dip into book, reading whenever the fancy takes them – which makes for a nice change 🙂

The first part, ‘Memory’, follows Pitol on trips into the past and far across the seas, sketching out his time abroad, both as a diplomat and as an itinerant writer.  Our initial picture of the great man is as a bumbling provincial abroad, awed by the people he meets (although we suspect that there’s a fair bit of poetic licence taken here…).  As the writer pours his memories onto the page, the focus turns slowly to the idea of memory itself and the influence it has on personality and person:

“We, I would venture to guess, are the books we have read, the paintings we have seen, the music we have heard and forgotten, the streets we have walked.  We are our childhood, our family, some friends, a few loves, more than a few disappointments.  A sum reduced by infinite subtractions.  We are shaped by different times, hobbies and creeds.”
p.20 (Deep Vellum, 2015)

Pitol, by all accounts, must be excellently shaped, as he has lived through a whole variety of times and interests – all of which makes for a wonderfully entertaining series of vignettes.

Next, we move on to ‘Writing’, a section in which Pitol offers the reader insights into his art.  From the origins of his passion, a house of books far from the bright lights of the capital, we follow him as he explores literature, finding like-minded writers in Mexico City before ending up somewhat randomly in Barcelona.  It’s here that he begins a long and successful career, writing in the midst of a cultural boom (one story here tells of his meeting with Jorge Herralde and the founding of the famous Anagrama publishing house).

This part of the book also sees several anecdotes in which Pitol describes the origins of a story, the use of events in real life morphing into the eventual seeds of his work.  He’s all for using life as an inspiration, even if the end result looks nothing like the story which was its genesis, but he does have some words of warning for those who are thinking of seeking inspiration within:

“The narrator-writer delves deeper and deeper into his own life as his novel progresses.  It is not a mere autobiographical exercise; writing a novel solely about one’s own life, in most cases, is a vulgarity, a lack of imagination.” (p.156)

The third section is entitled ‘Readings’, and if any reader is still clinging to the image of a man awed by giants, it’s here that this misconception is shed.  Pitol shows the breadth of his learning and thinking in a series of lengthy essays on books and writers, among them Jaroslav Hašek’s The Good Soldier Švejk, Thomas Mann’s diaries and Jerzy Andrzejewski’s The Gates of Paradise.  Pitol proves to be incredibly erudite, a multilingual master of words and a translator into Spanish from several languages – these pieces make for fascinating reading.

Showing there’s more to the man than mere cerebral excellence, though, the last part of the book, ‘Ending’, takes us out into the real world.  ‘The Journey to Chiapas’ is a three-part tale of the Zapatista uprising in the Mexican region in the mid-90s, one which sees Pitol’s journalistic side comes to the fore.  An ardent believer in the need for a better Mexico, the writer takes a journey to the frontline, hoping to learn more about what’s going on in the war zone, and why.  It seems there are no limits to his curiosity – this is not a man imprisoned in the ivory tower of his intellect…

*****
You can learn a lot about a man from his admirers, and (unsurprisingly) Pitol appears to have plenty.  In a contribution to Granta’s Best Untranslated Writer series, Valeria Luiselli extols his virtues, remembering her introduction to his writing (and there are definite echoes of Pitol’s memoirs in Luiselli’s Sidewalks, especially in her writing about Venice).  In addition, the foreword of The Art of Flight is provided by none other than Enrique Vila-Matas, an excellent piece in praise of a man who sees things slightly differently to the rest of us.

Much as I enjoyed the book, though, I wouldn’t say that it’s one for everyone.  The Art of Flight abounds with mentions of writers you won’t have heard of, and while that can be interesting, and inspiring, there’s always the risk for the casual reader of getting bogged down in a mire of foreign names and works.  Then again, perhaps not – in Pitol’s own words:

“Reading is a secret game of approximations and distances.  It is also a lottery.  One arrives at a book by unusual means; one stumbles upon an author by apparent coincidence only to never be able to stop reading him.” (p.293)

Also, as I mentioned above, The Art of Flight is not a book to race through.  While I spread my reading out over five or six days, which is a long time for me for a book of this length, I really should have taken longer.  With many short sections which can be read perfectly well in isolation, this is a perfect coffee-table work for the literary-minded, a book to be picked up whenever you have ten minutes or so to be filled.

The Deep Vellum edition has more to recommend it than just the actual content, though.  In addition to Vila-Matas’ foreword, we’re treated to Henson’s translator’s afterword (which, in my opinion, should be a standard feature of all works of literature in translation).  In addition to sketching out the importance of Pitol in the Spanish-speaking literary world, Henson uses these pages to outline the mountain of work required to complete the translation.  Pitol is a multilingual polymath, and for the translation to ring true, Henson was required to follow in the Maestro’s footsteps, looking at many of the texts mentioned throughout The Art of Flight.  As you might imagine, this was not an easy task…

Sadly, making the job even trickier is the fact that the writer is no longer in a position to assist with the translation.  Henson discusses his regret at being unable to collaborate with Pitol owing to the writer’s declining mental faculties – which makes it an ever greater shame that it’s taken this long to get the work into English.  At least the first step has now been taken, and with the second part of this trilogy, The Journey, out this month (with the third part to follow next year), Anglophones will soon have more opportunities to sample Pitol’s work.  And then, who knows, perhaps a novel or two?  I’m sure George (and Will Evans from Deep Vellum) are already on the case – let’s hope that it doesn’t take quite as long for his fiction to arrive as it did for the memoirs…

6 thoughts on “‘The Art of Flight’ by Sergio Pitol (Review)”