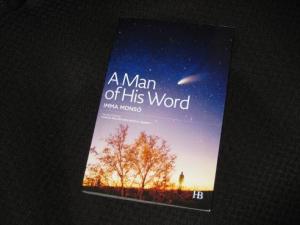 One of the writers I saw at last year’s Melbourne Writers Festival was Spanish author Nicolás Casariego, but the discussion about his book Antón Mallick Wants to Be Happy was actually a last-minute addition to the programme.  The writer who was supposed to come couldn’t for family reasons, which is a great shame.  Judging by her book, my latest  Women in Translation Month (and belated Spanish-Language Literature Month) read, it would have been a great session…

*****
Imma Monsó’s A Man of His Word (translated by Maruxa Relaño and Martha Tennent, review copy courtesy of Hispabooks) is set up nicely in its introduction.  We have a writer talking about the love of her life, a man known only as Cometa, and part of the book goes on to explore how the two fell in love, describing their life together.  A tale of enduring love, it’s also an intimate description of a man less ordinary, one whose influence reaches far beyond his everyday environment.

This, though, is only half the tale.  While strand A examines life and love, there’s also a strand B, and in this part of the story, the narrator relates the events of her life after her partner’s death.  There’s a telling contrast between the two strands, with the writer attempting to work out how to cope with the loss of the one person who made life worth living, using her words to try to ease the pain and confusion she feels:

“What you are reading now rests on what has already been erased.  Raw pain contributes nothing; it is shrill and impoverishing.  Any minimally sensitive reader can readily imagine the pain caused by the death of a loved one; perhaps she has even experienced it herself.  The thing to do with shrillness, if you’ve given vent to it, is to rid yourself of it to the degree that you can.  And keep erasing, until a different force, beyond pain, takes its place.  Bewilderment, for example.”
pp.14/5 (Hispabooks, 2014)

The novel, then, is an attempt to follow her own advice, two interwoven narratives which avoid anger and bitterness to present a picture of a man before and after death.  This is truly a story of two halves…

A Man of His Word is a book I enjoyed from the very start, a novel which makes for enjoyable reading despite the sadness of the subject matter.  The introductory section sets the story up, Monsó’s measured, gentle style helping to set aside the obvious pain beneath.  By combining the descriptions of the relationship and her memories, the narrator avoids making the book overly depressing, instead producing a clever retrospective of a love, and what happens to it when the object of your affections has gone.

Cometa himself is a most unusual man, gentle, fascinated by everything, a philosopher who attracts friends.  As his widow explains, his is a name imparted with good reason:

“I’ll call him Cometa, which is Catalan for ‘comet’.  That’s the nickname he had when I met him.  It suited him.  Why they called him that, I don’t know.  But I can imagine a hundred reasons.  Comets always escape.  They give off heat.  They leave a luminous trail.  They seem ethereal in the distance, much like his leptosomatic body, like his shape when you saw him approaching from afar, slender and elongated.  Because, like orbital comets, he always returned, but, like orbital comets, there was always a hovering suspicion, a remote possibility, that he might not return.” (p.24)

Cometa, as described by the narrator, is a rare breed, a man with many talents.  Intelligent, cultured and caring, he has the sort of charisma which attracts all who come into his presence.  The only problem here is that a man who receives admiration from all he meets might not really need anyone to love.

Still, our narrator is more than up for the challenge.  A writer who gives herself the name Lot (a nickname derived from a word that means kite in Mexican – a clever contrast with the comet…), she’s a woman easily bored.  Having grown tired of all her previous loves, she needs a man she can love fully, unconditionally, one who will never leave her jaded.  She also wants one who doesn’t really need her, and she’s quite prepared for (even longing for) the love to be mostly one-sided.  It’s a strange requirement, hoping to find herself superfluous to the man of her life.

In the introduction, there’s a suggestion that the reader might like to pick and choose, only reading the strand they find themselves more interested in.  The love story might be considered a little sickly for some while others may consider the writer’s examination of life and love after death a little too morbid.  Of course, this suggestion is tongue in cheek – in truth, the two strands, while capable of being read separately, are both necessary, each subtly influencing our reading of the other.

Of the two, it’s the second part that I’d say is the real success, a detailed, painful examination of 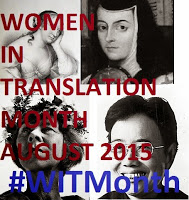 how to cope with loss.  Slowly recovering from the shock of Cometa’s death, Lot and her daughter create a world in which he’s still present.  Rather than cleaning out his old belongings, the narrator makes a conscious decision to keep all traces of his presence, carefully preserving his clothes, notes and recordings, savouring the idea that she’s still using the same toothpaste he did.  More than that, though, it’s the way the mother and daughter actively keep the memories alive, talking about him whenever possible, taking him with them on their travels and imagining how he would react in every situation they find themselves in.  Some of their friends (and some readers, no doubt) find it a little strange at times, a sign of people who haven’t recovered from the shock.  I’m not so sure…

As well as a story that draws you in, A Man of His Word impresses with good writing, thanks largely to an excellent translation.  Relaño and Tennent have produced a text that flows, mastering a natural style you never have to stumble across or second guess.  Monsó swings between a range of voices, from a gentle recount to a cold realisation of facts.  Despite the frequently sombre tone, a gallows humour is often present, as shown in the writer’s need for a few drinks:

So, is this all an attempt at self-therapy through words?  Perhaps (another similarity with Antón Mallick… is that Lot and her friends aren’t big on self-help books…).  More than that, though, the narrator’s story is born from a need to commit Cometa’s presence to paper.  Just as she’s unable to bring herself to remove him from her everyday life, she wants to ensure his memory doesn’t disappear, a heavenly body that will remain a constant in her life.

Having read A Man of His Word, it’s a shame Monsó never made it to Melbourne as I would have loved to hear her talk about the book.  It’s a great story with a simple message, one Cometa unconsciously imparts: seize the day.   You never know what’s around the corner, so you might as well make the most of the here and now.  Until more of Monsó’s work arrives in English, that’s what we’ll have to do with this book – while regretting there’s not more, we can just enjoy what is available 🙂