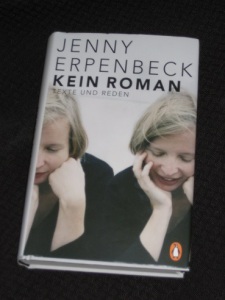 German author Jenny Erpenbeck has made quite a name for herself in the Anglosphere, largely on the back of her novels Visitation, The End of Days (winner of the Independent Foreign Fiction Prize in 2015) and Go, Went, Gone (longlisted for this year’s Man Booker International Prize).  However, as any regular reader of my site will know, she’s not averse to dabbling in other genres, with releases of short stories, plays and even some essays under her belt, and her latest release in German marks a return to non-fiction.  One thing’s for sure, nobody’s going to mistake this one for a novel – the title makes that abundantly clear…

*****
Kein Roman: Texte und Reden (Not a Novel: Texts and Speeches) does exactly what it says on the cover.  Spanning more than 400 pages, the book brings together an eclectic variety of odds and ends from the past twenty years (with one piece dating back to 1992), separating them into thematically linked sections such as Life, Writing and Literature, and Society.  As you might expect from this kind of book, there is a little repetition at times, with a few favourite anecdotes trotted out on several occasions, and some of the pieces are slightly less than enthralling.  However, overall there’s a lot to like here. I was originally sent a digital version by Penguin Verlag (Germany), but I decided to splash out on the hardback, and I’m fairly happy with my decision.

The early pieces, grouped together under ‘Leben’ (‘Life’), tell us a lot about the writer’s formative years in East Germany.  As she grows up in a communist state, she’s happy enough with her family and the little things in life, such as finding a smooth spot of tarmac to practice roller-skating on.  Looking back, the wall still casts a shadow over her life, but not in the way you might think.  Like many East Germans, Erpenbeck can be prone to a little ‘Ostalgie’, reflecting on the rubble of her old school and the vocabulary the united Germany has abandoned.  Yes, she now has more freedom, yet:

This freedom was not a gift, though, there was a price to pay, and that price was my whole life up to this point.  The price was that what had previously gone under the name of the present was now called the past.  Our everyday life was no longer everyday life, but an adventure we had survived, our customs had suddenly become a source of fascination.  In the space of a few weeks, the self-evident ceased to be self-evident.  A door that opened but once every hundred years had opened, yet those hundred years were now over forever.  From now on, my childhood belonged in a museum.
*** (my translation)

It makes for a timely reminder that reunification wasn’t all about ridding yourself of a miserable past.

Memories play a major role in Erpenbeck’s work, and there are several pieces in the book, quite apart from the childhood reflections, where she returns to the theme.  One of these is the earliest piece in the collection, an earnest university assignment on Wagner (if there’s one thing I learned from this book, it is Erpenbeck’s background in opera!).  The writer’s examination of Siegfried’s ‘Gedächtnisverlust’ (memory loss) in the “Götterdämmerung” part of the Ring Cycle is the longest piece in the book.  I have to say that I was a little lost by some of the musical terminology here (owing less to my weakness in German than to my complete lack of knowledge of music), but when the writer sticks to the literary side of the topic, it makes for a fascinating commentary on the theme of memory – and lack of it – running throughout the classic story.

Those are some of the texts, but as the title suggests, there are a fair few speeches here too.  The first of these dates from 2008, with Erpenbeck grateful for the honour bestowed upon her:

I have never given an acceptance speech, have never needed to give one – the reason for this is that this Solothurner Prize is the first award where I have, so to speak, received the main prize. ***

This is a rather modest, grateful approach from a writer who feels she’s finally arrived.  Don’t worry, though – she’ll have *many* more opportunities to work on her speeches.

You see, Germany has a plethora of literary prizes, and Erpenbeck seems to have won most of them, with a large number of her speeches (an integral part of the whole affair) collected here.  Some are simply variations on a theme, standard thank-yous with little original content, while another common approach is to consider the writer the prize is named after and find common ground between their work and her own.  In this way, we are treated to her thoughts on writers like Thomas Mann and Hans Fallada, but it’s the lesser-known writers Erpenbeck feels compelled to explore as a result of being awarded their prize that often make for the most interesting reading.  There is one other common thread, however, and that’s her genuine gratitude for the money attached to the prize, money that allows her to focus on her writing (serendipitously, I was reading this just as Anna Burns’ novel Milkman won the Man Booker prize…).

The speeches included here are not just made on the occasion of picking up novelty cheques, though.  At the heart of the book are the ‘Bamberger Vorlesungen’ (Bamberg Lectures), four speeches Erpenbeck gave over the course of a month back in 2013.  Coming in at well over a hundred pages in total, almost a book in their own right, they provide some fascinating insights into her work.  The first explores The Old Child as an allegory of not being able to move on after the fall of the wall, while the second focuses on The Book of Words and a rather interesting moral dilemma: is it ‘better’ to murder the children of your enemies (as the Nazis did) or make them your own (as was the case in Argentina)?  The third lecture then takes a look at Erpenbeck’s plays, with a particular focus on the importance of dialogue, and silence.  However, it’s the final talk that is, perhaps, the most interesting.  No prizes here for guessing that it’s on The End of Days, but you may be surprised to learn that the thirty-two pages are spent looking at just two sentences, and an afternoon the writer spent trying to improve them.

The final section is concerned with ‘Gesellschaft’ (‘Society’), and it’s interesting to see a development in Erpenbeck’s ideas as the years go by.  The focus on memories, family and her lost homeland never disappear, but they gradually morph into a more general idea of what’s important to people.  The writer has long been obsessed with borders, and in yet another speech she revisits the topic:

Between the first half of my life, which was rendered obsolete by the fall of the Berlin Wall and the collapse of the GDR, and the second, which began at that time, there exists a border of time.  Without this experience of a crossing from one world to a very different one, at least that’s how I see it today, I would probably never have begun to write. ***

Yes, it’s an old obsession, but we’re about to look at it from a brand-new angle. 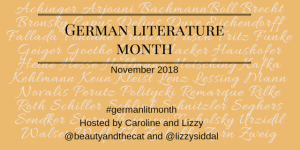 As you may have guessed, we eventually arrive at the writer’s involvement in the refugee crisis, including the friendship she develops with some of the African protestors in Berlin.  Many of the later texts are marked by a determination to open people’s’ eyes to what is happening in Europe, even when she might be making them uncomfortable.  Where her prize speeches, or her talks at graduations, used to be built around her memories of life in the east, now they are used to remind the listeners of Germany’s history and the hard days as post-war refugees.  In doing so, she continually plays on the irony of the people who pulled down the wall erecting new, higher barriers in their place…

That’s a lot to be getting on with, but it’s far from everything you can find in Kein Roman.  Other pieces include a few travel stories, random odds and ends of unfinished projects, and a series of texts inspired by paintings – I’m afraid I’ll have to leave those for others to describe.  I’m not usually one for rummaging around in writers’ personal lives, but I must admit that I enjoyed this book a lot.  It’s (inevitably) dull in places, but for the most part it’s an invaluable resource for any Erpenbeck fan (and with virtually everything she’s written on my shelves, I suppose that would include me…).  Before I leave you, though, there’s one thing I need to make absolutely clear.  Are you ready?  Listen carefully:

This is NOT a novel, OK?

Thank you for your attention.