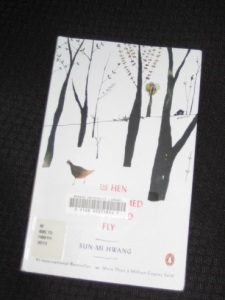 My interest in Korean literature coincided with the release of a wave of books about five years ago now, including Dalkey Archive Press’ ambitious Library of Korean Literature selection, and I’ve since got around to trying the majority of those early offerings.  However, there was one prominent book that, while not actively avoiding, I certainly wasn’t making much of an effort to track down, mainly because of a few dissenting voices among the positive reviews.  Luckily, though, I picked it up along with my most recent read at the university library, and it turned out to be most enjoyable – even if it took me less time to read it than to finish off this review 😉

*****
Sun-Mi Hwang’s The Hen Who Dreamed She Could Fly (translated by Chi-Young Kim) is the story of Sprout, a hen trapped in a coop inside a farm shed.  Enjoying the views of the outside world she can see from her position near the door, she dreams of freedom, and the opportunity arises when she is taken out for culling.  This brush with death is almost the end, but the plucky bird manages to come through and is rewarded with her freedom.

Life outside the cage isn’t quite what she expected, though.  Dangers abound, especially with a predatory weasel on the prowl, and matters aren’t helped by the cold attitude of the other animals who call the farm home.  However, a reason to live gives most creatures the will to fight on, and motherly love is the best reason of all – but how can an old hen with no eggs fulfill her dream of raising a child?  Where there’s a will, there’s a way…

The Hen Who… is an enchanting read, a fairytale-style story with a brave heroine you can’t help but admire.  The book sold millions of copies in its native land, and it’s easy to see why.  It’s a novel that will appeal to children with its entertaining, easy-to-follow plot, but it also has a lot for adults in the messages included beneath the narrative surface.

The main drive of the story comes from Sprout’s discovery of an egg left unattended in a nest.  Unable to lay any herself, she decides to hatch it, while her friend Straggler, a duck shunned by the rest of his kind, guards her.  It doesn’t take a genius to work out that there’s no hen in there, but that’s not important for Sprout.  Having successfully watched over the fragile egg until the creature inside emerges, she can finally call herself a mother and is determined to take care of her child.

Part of the success of the book is this depiction of Sprout as a fierce, loving mother to her son, Greentop.  She’s the archetypal Korean mum, enduring and suffering for her offspring.  In addition to making nests and fighting off danger, she makes sure her son is well fed, to her own detriment:

Sprout was thinner than ever.  She ate only to stave off hunger and spent all her time running around looking for Greentop, so she’d gotten as small as a reed warbler.
p.106 (Penguin Books, 2013)

In this portrait of a self-sacrificing mother, we find echoes of another successful Korean book, Shin Kyung-sook’s Please Look after Mother, but where Shin’s work was a little manipulative, this one is far more successful.  Sprout is fully aware that time will gradually pull her little family apart, so even while her energy slowly ebbs away, she does all she can to give her ‘son’ the best possible chance of survival.

It’s also clear early on in the novel that there are more than a few subtle swipes at the writer’s home society.  The overriding message here is that conformity is king, and Sprout is constantly put in her place by the other animals:

The hen spoke up first.  “One hen in the barn is enough.  And I have six chicks.  There isn’t room.  I’m also worried about the chicks’ education.  I know they’ll keep asking, ‘Why does he quack and call a hen Mom?’ ‘Why is he different from us?’  Some of them might even try to quack.  I can’t raise my chicks in a chaotic environment like that.  We need to send the foolish hen and the duckling packing.” (p.68)

Children might simply boo and hiss at the nasty hen, but this passage undoubtedly makes for more uncomfortable reading for adults – and not just Koreans.  I read the book the day after Naomi Osaka’s win at the Australian Open, and it was interesting to compare Sprout’s problems with some of the clumsy (or simply racist) comments that were aired in the media regarding Osaka’s ‘mixed-blood’ heritage.  It’s not just Asian societies that struggle with societal diversity, of course.  The 26th of January also marked Australia Day, an annual reminder that my own adopted country still hasn’t quite managed to settle its racial issues…

There’s another layer to the novel that is very Korean, though, and that is to do with the stratification of the farmyard (Korean) society.  There’s a definite pecking order (pun fully intended) on the farm, with some animals more equal than others, and if that makes you think of Animal Farm, I suspect the similarities are deliberate.  The dog responsible for guarding the barn lets Sprout know just how unequal things are:

“Why can’t I live in the yard?  I’m a hen, too, just like she is.”
“Ha!  Silly chicken.  What makes you think that?  Yes, you’re both hens, but you’re different.  How do you not know that?  Just like I’m a gatekeeper and the rooster announces the morning, you’re supposed to lay eggs in a cage.  Not in the yard!  Those are the rules.” (p.38)

The irony is that, just as is the case in the wider world, toeing the line is no guarantee of safety.  You see, there’s a higher power than even the arrogant rooster, and in another scene reminiscent of Orwell’s novel, the dog himself may come to a sticky end…

However, these readings simply add depth to what is already an excellent story.  Another influence on The Hen Who… must be Hans Christian Andersen, and Chi-Young Kim crafts an excellent English text here, simple yet elegant, that adds to this fairytale style.  The reader follows the indomitable Sprout as she does the impossible, rising from the dead, taking on farmyard society and protecting her charge from the dangers of the wild.  Then, just as you think you’ve got a handle on Hwang’s story, she inserts one final twist.  Just as in real life, if we look a little deeper, we can find the motivation behind the worst of actions, and the final pages cause the reader to reflect on the wider significance of Sprout’s struggles.

I fully expected to find this book a touch simplistic and dull, but I’m very glad I managed to find the time for it.  It may be suitable for older children, but it’s a novel that works on many levels and, more importantly, is simply an excellent read.  The blurb comments on the strength of the main character are, if anything, underdone, and I suspect readers will spend the book willing on the little hen who could, hoping that her dream of flying free will one day, somehow, come true…

All posts (unless otherwise stated) remain the property of Tony Malone. Anyone wishing to use all or part of one of my posts should seek permission before doing so.
Follow Tony's Reading List on WordPress.com
Join 3,411 other subscribers
My Tweets