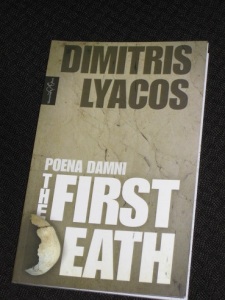 Regular readers may remember my posts a while back on the first two parts of Greek writer Dimitris Lyacos’ Poena Damni trilogy, and today’s review sees me finishing off the work with a look at the third section.  It’s an intriguing, perplexing cycle of books, with each having it’s own unique style; where Z213: Exit was a series of confusing prose fragments, With the People from the Bridge was a confronting play, and today’s choice takes us in yet another direction.  This one can most definitely be filed under poetry, but that’s probably the only confident statement I’m prepared to make about it – this isn’t a book that gives up its secrets lightly…

*****
The First Death (translated by Shorsha Sullivan, review copy courtesy of Shoestring Press) was the first of the three parts to be published, but is apparently meant to be read after the other two.  According to the back-cover blurb, the work (consisting simply of fourteen short poems, each with a roman numeral for a title) concerns “a booklet found by the protagonist of Z213: Exit during the course of his voyage” and tells a story of its own, following a man stranded on a desert island and the horrors he sees there.

I’d have to say that I’m very grateful to whoever wrote that summary as I wouldn’t have got any of that from my own reading.  The fourteen poems are confusing, abstract pieces, full of emotion and description, but with very little for the intrigued reader to go on  Where the first two parts of the trilogy had enough to give us at least the slightest of footholds in the world of the text, this one, due in part to its brevity, defies interpretation, meaning it can be a bit of a tough read.

The First Death isn’t always the gentlest of experiences, either, as shown by the rather morbid start:

Sea of iron.  Moon silent as pain in the depth of the mind.  A body swept here and there on the rock like seaweed or a lifeless tentacle, fruit of a womb-ship wrecked by the winds, ensanguined and flesh-filled mire.
p.13 (Shoestring Press, 2017)

From here, we move on in the company of a man staggering along in a nightmare landscape.  There are birds feasting on corpses round every corner, and the mentions of blood, oozing flesh and decay never seem to run out.

Eventually a story of sorts emerges, with our anonymous guide roaming around this hellish prison trying to work out how he got there:

splitting the membrane trying desperately
to grasp familiar voices from the crew’s belly
where they rest in empty beehives
and yet I cannot make out the fragments
victims dim in the distance and the things I remember
are no longer unfolding and my memory holed and
worn (p.41)

His wanders around with no people or places to help him (or us) make sense of his dizzied, confused thoughts.  It may just be the knowledge that this is a Greek work, but you can’t help but think our hero is on a kind of odyssey here, particularly given the division of the text into the parts.

The man’s journey has him looking for signs of life, and of his past, but the bodies he encounters aren’t the only sign of damage – he’s hurting, too:

Because you are looking for the mountain and the nails
beneath the stars
black crosses leaning towards the triumph
and once more you crawl and
scramble on the earth’s wounds
spitting sulphur which cauterizes your limbs (p.33)

The First Death is a relatively short work, with only one of the fourteen pieces running to more than a page in length, and there are two distinct styles to the poems.  Some are laid out in lines in a familiar poetic format while others are brief prose paragraphs (which are no less ambiguous than the other kind).  Given the overall word count, it shouldn’t really take that long to read the book, but it’s a dense, forbidding work, one that demands multiple reads.  Even then, there’s no guarantee that more insights will be forthcoming.

This overwhelming sense of of hidden meaning is only enhanced by Sullivan’s notes, with which he complements his translation.  Here, he provides other nuances of the words used in the original text, some of which are unfortunately lost when rendered by one English word.  Apparently, the original blends modern Greek with fragments of the ancient language – which is interesting, but won’t get us much closer to uncovering the book’s secrets.

This last chapter of Poena Damni, then, is one for people who enjoy poetry, and a challenge, making for a suitably overwhelming end to an intriguing trilogy of works.  It certainly won’t be for everyone, but if you’re prepared to take the occasional leap of faith in your reading, it’s well worth a look as it’s impenetrable, perhaps, but never less than compelling.  This is a work that has obviously been a labour of love over many years, for both writer and translator, and even if some of its mysteries will have to remain just that, I’m still very grateful for all their hard work 🙂