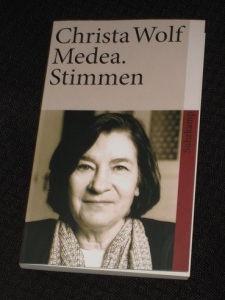 When I compiled my list of the top ten books by women in translation for Meytal Radzinski’s #WITMonth Canon, I was always going to include something by Christa Wolf, and my final choice was Kassandra, a wonderful retelling of the end of the Trojan War by the unfortunate soothsayer of the title.  Well, they say canons should always be fluid, and that’s a good job, because if I were repeating the exercise now, my decision might well be different.  Today’s review sees another classic text receiving the Wolf treatment, and I suspect that this book is even better than the last one…

*****
Medea. Stimmen (Medea. Voices) is, as you would imagine, a retelling of the story of Medea, the woman who helped Jason and his Argonauts steal the Golden Fleece from Colchis (current-day Georgia) and take it back to his home of Iolcos in the vain hope of returning him to his rightful place as king.  When that proves impossible, the adventurer and his companion, along with those Argonauts and refugees from Colchis who still follow him, seek sanctuary in Corinth, where King Creon welcomes them with open arms.

However, as time passes, the welcome begins to wear thin.  The haughty Corinthians look down upon the rough, emotional migrants, and Medea’s proud demeanour particularly grates on the highly male-dominated society.  Eventually, rumours begin to spread about her actions, and when the city is visited by a series of natural disasters, it’s an opportunity for her enemies (of whom she has many) to act.  But surely her husband, the legendary Jason, will protect her from these political intrigues?  Don’t bet on it – Jason has other irons in the fire, and even he has had enough of a woman who simply won’t acknowledge her true place…

The original myths portray Medea as a sorcereress and a murderer of several people, with her brother and children foremost among the victims.  However, Wolf’s version shies away from this picture of an evil presence that needs to be purged, as the writer reexamines Medea’s life and attempts to redeem her reputation.  What awaits the reader in Medea. Stimmen is a woman ahead of her time who falls victim to the repression and sexism of the rulers of her new home.  Surprisingly, she finds herself betrayed not only by her enemies, but even by those she seeks to help, who are afraid of the consequences of breaking free from the restrictions that govern their lives.

The novel features eleven monologues by six people (the ‘voices’ of the original title), including Medea, Jason, Creon’s daughter Glauce and three characters invented by the writer: the two astronomers Akamas and Leukon, and Agameda, a Colchis woman who was once Medea’s student, but now hates her.  As the voices take their turn to unburden their hearts, the narrative gradually moves along, with the eleven chapters showing contradictory versions of Medea and each other, each person focused on their own issues.  Jason, for example, still loves his wife, but fears her, too, unable to decide how to act once she becomes persona non grata in Corinth:

That I must take pains not to continually fall for her tricks, for she will, of course, spin me one of her tales about the death of her poor brother, stories that seem fully credible when she is fixing you with her gaze, but now I must pull myself together so as not to be taken in again.
*** (my translation)

Of course, as we hear from other chapters, the fact that the King has a special role in mind for the legendary Argonaut might well be swaying his views towards his estranged partner.

The early parts have Medea and Jason looking back at the events that took place in Colchis, but the narrative soon takes a turn and instead describes the beginning of Medea’s downfall.  We learn of the hardships the city has experienced in recent years, with Corinth visited by drought, famine, earthquake and a plague, and whenever disaster strikes, Medea is there, using her wisdom and learning to help people make it through the tough times.  Inevitably, though, that’s not how others see it – rumours soon circulate that she’s the one making all this happen.

While Medea. Stimmen is mainly focused on the main character, Wolf introduces several causes for Medea’s problems, with sexism one of the most prominent.  For many citizens of Corinth, Medea’s main fault is her inability to bow her head to men as she walks proudly through the streets, wearing her hair loose like a tribute to her beauty and self-confidence.  Jason, again, is torn:

The way she walks, even.  Challenging, that’s the word.  Most of the Colchis women walk that way.  I like it.  But you can also understand the wives of the Corinthinans when they complain: why should foreigners, refugees, be allowed to walk more freely in our own city than we can? ***

In her actions, too, she is seen to be overstepping the mark, especially when she attempts to bring Glauce out of her shell, encouraging her to dress in bright colours and take care of her hair, as well as arranging for the palace-bound princess to swim at the beach.  All innocent enough, but in a city ruled by men, the idea of women changing in any way is a threatening one.

Another reason for Medea’s troubles is the barely concealed xenophobia of the locals, who consider the ‘wild’ Colchis people almost as savages.  Disturbed by their strange customs, the Corinthians are happy to see the immigrants ensconced in a ghetto outside the main city, and there are hints of discrimination against the newcomers’ appearance, too.  Wolf often mentions physical differences (evident in Medea’s two very different twin sons): straight blond versus curly brown hair; pale and brown skin; slight or solid build.  Interestingly, given that the book appeared in 1996, after German reunification, there’s a possibility here of some implicit criticism of the disdain West Germans showed towards their new family members…

Gradually, though, we learn that the crusade against Medea has less to do with her than the secret she begins to uncover, a dark stain on Corinth’s proud reputation.  As it turns out, the book is a rather political work, and the sinister Akamas is at the heart of all the scheming.  He’s initially smitten with the beautiful and intelligent newcomer, but later turns against her, proving himself to be a consumate politician in knowing the right time to withdraw his favours:

I haven’t heard that laugh for the longest time, I’m fully aware that it’s we who have stifled it, alas, one must often do things that one would prefer not to. ***

This is just one of several hypocritical laments, and while he doesn’t instigate anything himself, it’s his tacit approval that leads towards the subsequent witchhunt.  The truth is that power is all that matters, and as Medea starts to interfere, and discovers facts that most would rather see left buried, a few nods in the right direction is all it takes for her downfall to be set in motion.

Medea. Stimmen is a fascinating, compelling story, well constructed and making excellent use of the source material while giving it that ‘history versus herstory’ twist.  Perhaps the most impressive part of the novel, though, is the way Wolf exonerates her heroine of most of her historical crimes while still giving her the air of a woman who has brought her fate upon herself.  If Medea had been painted as innocent, docile and willing to adapt, she would have come across as a cardboard cut-out, and the book wouldn’t have been anywhere near as succesful.  Instead, we see a woman who annoys everyone with her unwillingness to take even the smallest step towards saving herself, rubbing her superiority in people’s faces wherever possible and refusing to take a backwards step.  She’s not the pantomime witch of the myths, but she’s still flawed, and it would be a foolish reader that takes her completely at her word.

Overall, it’s another impressive feat of turning a familiar story into a reflection on human failings and prejudices, and a novel that will undoubtedly spark interest in the original versions (I’m intending to have another quick flick through the Euripides play, which features a slightly less sympathetic version of Medea…).  As always with the classics of world literature, there’s a lot that can be read into the story, and other readers would no doubt focus on different aspects of the book (see, for example, Melissa’s review over at The Book Binder’s Daughter blog), so I’d urge you to try it and decide for yourself how much responsibility Medea holds for what happens.  Sadly, just like Kassandra, Medea. Stimmen didn’t make our new publicly voted feminist canon in August – consider this my request for its inclusion 😉

*****
There’s a 1998 English-language edition released by Nan A. Talese (now a small PRH imprint) under the title Medea, translated by John Cullen.