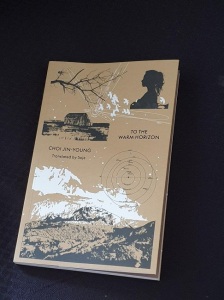 While Honford Star have taken readers to Japan and Taiwan recently, it’s Korean fiction that forms the bulk of their offerings, and their latest selection takes us back to that country, if only for a short while.  You see, this latest release is very much a road story, set mainly in Russia, and what’s more, although the book first appeared in Korean in 2017, it’s a story for our time – scarily so.  Dress warm and pack light – it’s time to hit the road…

*****
Choi Jin-young’s To the Warm Horizon (translated by Soje, review copy courtesy of the publisher) is a disaster story with a difference.  We begin with a prologue in which, Ryu, an elderly Korean woman, looks back several decades to a time when the world was struck by a fast-mutating virus.  Almost as soon as people had time to acknowledge the news, the disease hit, killing millions and shattering society.  In the aftermath, the survivors were forced to work out how to go on, and with the situation dire and dangerous in their home country, many Koreans decided to flee to the continent in the hope of riding out the storm of destruction.

The book then takes us to Russia, where we encounter several groups of Koreans moving westwards, without really knowing why.  Ryu, her husband Dan and their son Haemin are cautiously moving down the highway in the family car, while Jina and her extended family (along with Gunji, her neighbour) are better prepared, and armed, in two trucks.  However, the two sisters Dori and Joy aren’t as well off, walking through the Russian winter in battered shoes, scavenging for food and clothes wherever possible.  Inevitably, even in a land as vast as Russia, the groups are fated to meet each other, and when they do, they’ll discover that in a broken world, nationality doesn’t mean as much as it used to.

In the current climate, To the Warm Horizon can make for rather uncomfortable reading.  There’s something slightly eerie and prophetic about Choi’s story of the virus, and while we’ve thus far been relatively sheltered here in Australia, readers elsewhere might not be ready for a book like this.  The prologue, especially, with details of deaths and mass graves, may prove rather upsetting for anyone personally affected by recent events.

However, Choi’s novel is less a tale about the actual illness and its spread than a story of the aftermath, what comes after the initial wave of destruction.  The book takes the form of a series of first-person accounts told by travellers desperate just to stay alive.  However, as you can imagine, not everyone is content to live and let live, and the bright, optimistic Jina soon learns that even those close to her are capable of worrying behaviour:

The road ahead will be full of hardship and brutality, but even the present is fraught with danger when you can’t trust anyone, not even those closest to you.

In a ruined world (no Internet, petrol running out), many of the survivors are reduced to walking aimlessly, and here the choice of Russia for the setting proves a telling one.  For the first time, the travellers realise the true size of a world that had seemed small in the era of intercontinental flights.  Now they trudge endless roads, sheltering in ruined houses, shivering while waiting for spring to finally arrive.  Most people are simply heading west, hoping for warmth and, perhaps, something better – whatever that might be.

One focus of the novel is how we react when our world crumbles around us, and it’s usually fairly badly.  The Korean travellers aren’t always as happy to see each other as you might expect, and Choi uses the interaction between the groups to examine human nature, and the opposing impulses of lending a hand and pushing strangers away.  Given their blood ties, and the safety in numbers, you’d be forgiven for thinking Jina’s clan is the happiest, but family ties can be deceiving, and Jina soon begins to find herself closer to the outsiders – first Gunji, and then Dori and Joy after their arrival.

To the Warm Horizon is obviously a story of what might be, but you suspect that it’s trying to say just as much about our current world.  For all the reflections on the ludicrous contrast between worrying about low TOEIC scores and fleeing from bandits, there’s a sense that the writer is criticising contemporary society.  As Dori muses, it’s not as if life was that easy before the catastrophe:

What kinds of things did I grow up hearing?  It’s a dog-eat-dog world out there.  Don’t trust anyone so easily.  It’s your loss to be nice.  You shouldn’t look too obliging.  Survival of the fittest.  Free-for-all.  Winner takes all.  I’d heard all of them ad nauseam long before the virus spread across the world.  Even those who were critical of these phrases repeated them.  Was it possible that the things I said in the name of keeping Joy safe were actually preventing her from dreaming? Was I precluding her from pursuing a different life, limiting her to live only as I did? (pp.112/3)

Human nature being what it is, this behaviour is only magnified in the post-virus era.  The selfishness shown by certain characters, and the chaos they find when they eventually come across larger groups of people, should come as no surprise to anyone accustomed to modern life.

This (of course) holds especially true for women, and it’s only fair to warn you all that some of the most disturbing scenes in the book involve rape.  In a post-apocalyptic society, might is right, and men simply take what they want from women (often at gunpoint).  However, women get the short end of the stick in more unexpected ways, too.  The rumours of a ‘cure’ for the disease, a completely invented, misguided remedy, inevitably come to involve young girls more than boys – it’s little wonder Dori won’t let Joy out of her sight…

And yet, To the Warm Horizon is by no means a completely bleak story, and that’s thanks to the occasional moments of kindness.  Little things, reminders of a happier time, make a big difference to people who have almost nothing :

I clutched the lipstick, laid on my side, and looked at her.  The moment Dori gave it to me, I realized how much I’d been wanting it.  On this desolate, frozen expanse of land – on this endless, endless road – amid these people weary from misfortune and despair, I’d been wanting exactly this sort of thing.  Not something that was meant to be eaten or worn, but something that made me more myself. (p.37)

In fact, what makes the book worth reading are the relationships that do work amidst the mistrust and abuse.  Apart from the growing love story between the two young women, Dori and Jina, there’s Gunji’s unrequited love for Jina, and his gratitude for her saving him by dragging him along.  Along the way, Joy grows up, reevaluating her connection to her sister, and even if Ryu and Dan know that there’s no great love in their marriage, they still find something worth saving.

Don’t expect any answers or real closure from To the Warm Horizon with regard to the wider world or the disease, as the background and set-up are merely there to allow the writer to explore how her creations react, with the book less a work of pure speculative fiction than an examination of human nature under extreme stress.  For the most part, we are shown how hard times bring out the worst in people, whether that involves sexual assault, cannibalism or murder (or, back in our world, merely toilet paper hoarding).  But Choi also says that they allow our better qualities to shine through, above all, love – and that’s the message most readers will want to take from the book, especially in our own, turbulent times…