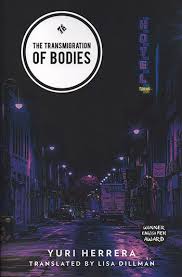 As you may have noticed (if only from my Spanish-Language Literature Month posts), there appears to have been a mini-boom of Mexican writing in English recently, and while Valeria Luiselli was at the forefront of this latest wave of authors, Yuri Herrera appears to be the newest face of the movement.  Fresh from winning the Best Translated Book Award with Signs Preceding the End of the World, a book inexplicably overlooked by the Man Booker International Prize panel (we on the Shadow Panel are still kicking ourselves for not calling it in), Herrera’s back with another work in English.  The team is all together again (same translator, same publisher), but the approach is slightly different – where Signs… had a rather dreamlike air, this one is a far grittier affair, taking us into the mean streets of a town in crisis…

*****
The Transmigration of Bodies (translated by Lisa Dillman, electronic review copy courtesy of And Other Stories) begins with a man walking out onto the street to find a rather disturbing sight:

Buzzing: then a dense block of mosquitos tethering themselves to a puddle of water as tho attempting to lift it.  There was no one, nothing, not a single voice, not one sound on an avenue that by that time should have been rammed with cars.  Then he looked closer: the puddle began at the foot of a tree, like someone had leaned up against it to vomit.  And what the mosquitos were sucking up wasn’t water but blood.
(And Other Stories, 2016)

The reason for this silence is the sudden appearance of a mosquito-borne disease, which has led to most of the city’s inhabitants shutting themselves up at home.  Our friend decides to do likewise, until he’s invited in by a beautiful neighbour, the interestingly-named Three Times Blonde (who promptly changes his mind…).

Sadly, a phone call interrupts, and the man’s real identity is revealed.  He’s called the Redeemer, a fixer for people with delicate issues, and the call introduces a problem which is going to require all of his considerable people managing skills.  The son of one of the town’s most important families has gone missing, leading to a further abduction in retaliation – and that’s not all.  As the Redeemer reluctantly leaves his neighbour’s apartment, he gets the feeling that this is going to be a long, long day…

Like Signs…, The Transmigration of Bodies is a fairly short work, one with a gritty, noir feel.  Once the first (slightly misleading) chapter is out of the way, we have the Redeemer doing what he does best, running around the streets, solving other people’s problems.  The best way to describe him is as a slightly run-down version of Pulp Fiction’s Mr. Wolf, a one-stop shop for all your problems.  However, we get to see him from the inside, privy to the inner thoughts of a tired man trying to keep the peace.

Once the story hits the streets, it all shifts up a gear.  The majority of the town is deserted, with most shops closed (leaving the Redeemer struggling to even buy a bottle of water to ease his hangover), lending the story a rather eerie feel, but there are pockets of activity centred around the shadier areas.  His first trip is to the red-light district where a contact quietly tells him what he saw the night before, before he starts to visit the families involved in the mess, hoping to get things settled quietly before things go up in flames.

Another similarity with Herrera’s last release in English is the way the story is set with no explicit place markers.  This is a run-down town where the law is optional, and you’re as likely to be pulled over by soldiers as stopped by criminals looking for a body to deliver:

Don’t matter if your thing’s a burning bush, some lusty dove, a buried book, big bank, talk or cock, there’s room for us all.  But no sir, he knew better, the real deal was: Don’t give a shit what you’re doing, but you better not look at me fucker.

Part of the success of The Transmigration of Bodies is the excellent cast of supporting characters making up this prickly community.  Quite apart from the feuding Fonsecas and Castros, we meet the half-crazy, towering Neeyanderthal, Vicky (a hard-bitten nurse) and the Mennonite, the Redeemer’s counterpart, doing his best to keep the other side of the feud happy.

At times, the book reads more like a play, the five chapters working quite well as acts, with each slight shift of location acting as a scene change.  There are obvious Shakespearean undertones (one of the missing kids is even called Romeo…), and there’s something very traditional about the way Herrera is using his modern setting to examine an age-old theme, the way people behave in times of stress.  The pressure created by the epidemic is making people act crazy, and this goes for the whole town as much as for the two main families, allowing the writer to expand on the lunacy of an eye for an eye mentality.

Where Signs… is a slightly more symbolic book (Makina appears almost other-worldly at times), The Transmigration of Bodies is a far more down-to-earth work, with the Redeemer as a very human (flawed) saviour.  There’s a fair bit of humour too as he’s a fairly self-deprecating character, and as he fumbles for condoms or tries to mediate between his argumentative companions, it’s hard to stifle a smile.  Even in the midst of the escalating feud, there’s time for a sub-plot involving Three Times Blonde’s boyfriend, who has found out about the fling and is out for revenge…

I really enjoyed The Transmigration of Bodies, and in the Redeemer Herrera has created an excellent character, one who knows how to defuse the trickiest of situations, but who (sadly for him) also finds it hard to turn down someone in distress.  I’m not sure this one will be winning any prizes, but to be honest it might actually be a more popular book with the average reader, and I wouldn’t be surprised to see it pop up as an indie film at some point either, as it certainly has that feel about it.  Chalk up another success for Mexican lit (and And Other Stories) – long may it continue 🙂

5 thoughts on “‘The Transmigration of Bodies’ by Yuri Herrera (Review)”