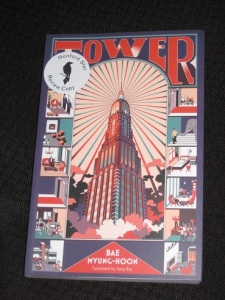 While Honford Star started off as a press focusing squarely on classic fiction from East Asia, the plan has changed along the way, with the titles offered since their relaunch far more modern, and edgier.  So far, we’ve been hunting in the Taiwanese rainforests and star gazing in Tokyo, but now it’s time to head back to Korea, for the first of three offerings from the country.  Sadly, though, we won’t actually be getting out much as my latest choice sees us confined to one building for our entire stay.  Mind you, when you live in a place like this, you might end up never leaving it again…

*****
Bae Myung-hoon’s Tower (translated by Sung Ryu, review copy courtesy of the publisher), as you can tell from the cover, is all about a giant building which, unbelievably, is actually a recognised sovereign state.  With a population of over 500,000 people, it has its own government, borders and army, and Beanstalk, as the building is known, is certainly not your average skyscraper:

Beanstalk was an environment they had never seen before; it seemed spatially impossible.  The number 674 for starters.  Instead of 674 spaces lying neatly on top of each other in clearly defined floors, oddly-shaped Tetris blocks were piled to a height commensurate with 674 floors, so you could not say for sure how many floors the building had.  The total number of floors changed depending on where you started counting.
‘Three Wise Recruits’, p.15 (Honford Star, 2021)

Beanstalk, then, is the futuristic setting for a collection of six stories, each plunging the reader further into Bae’s world while also retaining enough of a resemblance to our own society to make us think about how different tower living really is.

The size and scale of Beanstalk is apparent from the first story, ‘Three Wise Recruits’.  The second half of this piece, which focuses on research into the power structure shaping the state, has three researchers from outside Beanstalk needing to find their employer to share some surprising findings.  This allows the writer to explain the practicalities of travelling hundreds of floors in a place where lifts act as public transport (entailing the usual issues of off-peak passes and rush hour).  Deeper insights from the other side of the same dilemma are provided in ‘The Elevator Maneuver Exercise’, where a man is charged with working out the logistics of moving troops from one part of the building to another in times of emergency – only for things to go horribly wrong when one actually occurs.

Another interesting aspect to the book concerns the workings of the city-state, with most of the stories touching on bureaucracy and the insular nature of Beanstalk.  In ‘Taklamakan Misdelivery’, a navy fighter pilot is lost on a secret mission, and we get to peek behind the scenes as the politicians decide what to do (or, rather, what not to do).  ‘The Elevator Maneuver Exercise’ also shows a reluctance to act, even if we see that the building has, if anything, too many layers of bureaucracy, with the chain of command breaking down at a crucial time.

It won’t take the brightest of readers to realise that Tower is very much a twisted satire on Korean society.  This ‘biggest is best’ world is merely a natural progression of the Chaebol conglomerates, with the biggest of all swallowing other companies and becoming its own state.  I’m sure there’s also a lot of contemporary Korean society in the overreach of public eyes into the personal sphere, as reflected in ‘In Praise of Nature’, a story where an author self-censors and writes about trees for fear of a backlash from the government (a situation many Korean writers would have experienced…).  Another interesting concept is featured in both ‘The Buddha of the Square’ and ‘Taklamakan Misdelivery’, two stories that touch on the different rules for those lucky enough to be citizens of Beanstalk and the outsiders who service the building’s needs.  Just as happens in the first of these two stories, Koreans aren’t exactly averse to protesting in public spaces (I’m not sure even Park Chung-hee used a nervous elephant to scatter crowds, though…).

Political issues pervade the stories, particularly corruption.  Beanstalk is a state where bribes are widespread, expected and acceptable – until, that is, someone decides that it’s time for a crackdown.  However, Bae frequently asserts that it’s not the state, or any particular leader, that infringes on people’s freedoms, but those lower down the food chain, hoping to please their masters:

Once the obvious watchdogs over the government were quieted, other voices spoke up.  Then, the security guards took the lead in digging up their dirt.  As before, at no point was anyone’s freedom of expression or freedom of assembly taken away.  The rules were simply enforced a little more rigorously in other areas.
‘In Praise of Nature’, p.42

A mere hint, a gentle nudge on the levers of power, and there’ll be someone ready to start a witch-hunt and come down hard on dissenting voices.  That all sounds oddly familiar… 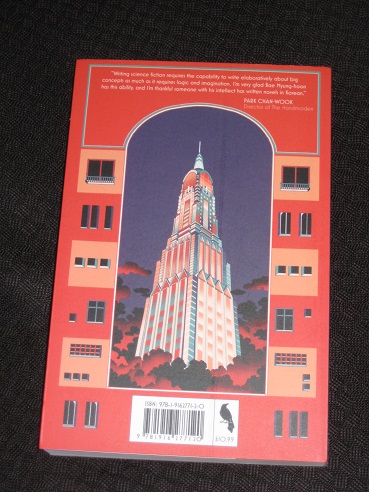 Yet Bae hints that life in Beanstalk isn’t all bad, and that the vertical society can come together in times of need.  The main example of this occurs in ‘Taklamakan Misdelivery’ when the military, reluctant to waste resources on a forlorn hope, decides to give the crashed pilot up for dead.  Earlier in the story, Bae introduces the idea of a communal post service, showing how the community can be greater than the sum of its parts, and when the pilot’s ex-girlfriend expands on that idea by initiating a kind of crowd-sourced rescue mission, the results are astounding.

There’s much to enjoy in Tower, quite apart from Jisu Choi’s wonderful cover designs.  There are six excellent stories, plus three bonus features (including an interview with a dog!) that won’t make sense until you’ve read the book, and the writer uses a mix of styles, including narratives, first-person accounts and even an epistolary story.  The tales are always intriguing and never overly complicated.  Bae carefully introduces the reader to his world without overwhelming them with details, and the measured style pulls you along.  Praise must go here to Sung Ryu (another member of the Smoking Tigers collective) for her excellent work on what I believe is her first full work of fiction translated into English.

Although Tower is a collection of stories, the pieces are connected by far more than setting.  Quite apart from the famous dog that leaves his paw-prints in every scene, there are other threads for the reader to follow through the book.  In particular, all of the stories mention Cosmomafia, a rival enterprise with which Beanstalk constantly seems to be at war, and this all culminates brilliantly in the final story ‘Fully-Compliant’, a spy thriller that looks at the very nature of the state, but also what it means to be a citizen.  The question posed here is whether it’s possible to grow to enjoy life in a place where you’re an anonymous outsider – and whether you’d actually want to.

All in all, then, Tower is an enjoyable collection of stories, and I’m very happy to have spent some time in Bae’s world.  However, I can’t help thinking that having created this wonderful place, he surely wouldn’t want to abandon it so soon.  I suspect that with lots more to explore on the building’s 674 floors, there must be the possibility of a sequel – and if so, I’d certainly be interested in stamping my visa for a return visit to Beanstalk 🙂